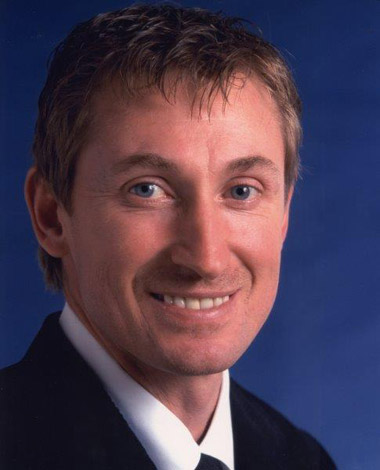 “The true heroes of the world are those who find a way to overcome adversity to achieve success in a way that helps themselves, their families, and society.”

The first recipient of the Horatio Alger International Award, Wayne Gretzky serves as a role model of outstanding character who is committed to helping others.

Known as “The Great One”, Gretzky is widely considered to be the greatest player in professional hockey history. He holds 61 National Hockey League records, was named the fifth greatest athlete of the 20th century by ESPN, and was inducted into the Hockey Hall of Fame in 1999. He also put together the team that won Canada’s first gold medal in hockey in 50 years at the 2002 Winter Olympic Games.

Raised in Brantford, Ontario, Wayne Gretzky started playing hockey almost as soon as he could walk. His father, Walter, built an ice rink in the backyard, where Gretzky spent hours practising every day, often alone. While he wasn’t physically intimidating, Gretzky’s speed, cunning, and creativity on the ice were clear to anyone who watched him play. He was a phenomenon as a young player, scoring over 1000 goals before he turned 13.

After playing junior hockey in Toronto (having moved there at 14), Peterborough, and Sault Ste. Marie, Gretzky got his start in the major leagues with the Indianapolis Racers of the World Hockey Association. He joined the Edmonton Oilers in 1979, and the rest is history.

Gretzky carried the Oilers to four Stanley Cup wins in the 1980s before being traded to the Los Angeles Kings in 1988, then briefly to the St. Louis Blues, and finally to the New York Rangers, with whom he finished his career. Gretzky retired in 1999, and his jersey number, #99, was retired by the NHL during the All-Star Game in 2000.

Gretzky’s list of awards and achievements is impressive. He is the greatest scorer in NHL history, being the only player to have scored over 200 points in a single season, a feat he accomplished four times. He was named male Athlete of the Year by the Associated Press when he first accomplished this exploit in the 1981-82 season, becoming the first hockey player and first Canadian to receive this distinction. In 1982, he was also named Sportsperson of the Year by Sports Illustrated and Canadian Newsmaker of the Year by the Canadian Press. He won the Lady Byng Trophy five times, the Hart Trophy nine times, and the Art Ross Trophy 10 times, as well as the Conn Smythe Trophy twice.

On the global stage, Gretzky carried Canada to gold at the 1984, 1987, and 1991 Canada Cup tournaments and was the executive director of Canada’s men’s Olympic hockey team, which took home the gold in 2002.

Since retiring from the rink, Gretzky has continued his involvement in sports. He became a part-owner of the Phoenix Coyotes in 2000, then became the team’s head coach. In 2007, he launched the Wayne Gretzky Estates Winery.

Gretzky is a hero for young Canadian hockey players who dream of a career in the NHL. His records have stood the test of time, and many of them are believed to be unbeatable. Even more incredible, Gretzky’s achievements on the ice have not interfered with his kindness and likeability. When he beat Gordie Howe’s NHL records for most points scored and most goals, Howe stated that, “The fact that the record was broken by someone who’s such a great person takes away any sense of loss that I might have.”

Gretzky is an honorary member of the Board of Trustees of Right to Play, an international humanitarian organization, and Honorary Chairman of the Ronald McDonald House Charities. He is a recipient of the Olympic Order and the Order of Canada. He and his wife Janet launched the Wayne Gretzky Foundation, which provides disadvantaged youth with opportunities to play hockey.