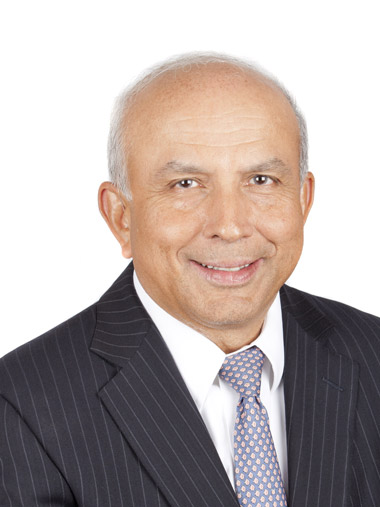 “Opportunities are unlimited in the United States and Canada. All you have to do is work hard.”

Prem Watsa, the third of four children, was born in 1950 near Hyderabad, India. His father was a teacher of English and math and later became the principal of an excellent boys’ school. “My father’s parents died when he was only three,” says Prem. “He was raised by his grandfather, who was a scholar and the first Indian principal of the Basel Mission Theological Seminary. But when my father was barely a teenager, my great-grandfather died and he was placed with different relatives. He won a scholarship to Basel Mission School and then took out a loan to go to a college run by Jesuit missionaries. My dad was an upright, no-nonsense kind of guy—tough, tough, tough. He expected me to work hard. He expected me to study. If I got 90 percent on a test, he asked me about the other 10 percent. But my father was a great influence on me. I will never forget one piece of advice he gave me. He said, ‘Work as hard as you can, as though everything depended on you. Pray as hard as you can, as though everything depended on God.’”

Though the family had little money, Prem, along with his brother and two sisters, had the advantages of loving, attentive parents. The Watsas were Christians, and church each Sunday was also an important part of their lives. Prem says, “I was brought up on the Christian values of family, honesty and integrity, and doing the right thing.”

As a boy, Prem’s family followed his father’s career from town to town. When his father became a vice principal and then a principal, Prem and his siblings benefited by receiving free tuition at the schools where he served—some of the best in India. Prem enjoyed school, which was a good thing since education was highly important to his parents. He adopted his father’s drive and competitiveness and distinguished himself as a top student. It wasn’t traditional for Indian children to work. For Prem, his job was to do well in school. “Classes, sports, homework, no parties, no going out-that was my life in high school,” he says. “But it was no big deal for me. I was naturally inclined that way and I liked the structure.”

In those days, schooling in India was mostly technical: biology and sciences to produce doctors, or math, physics and chemistry to produce engineers. Prem’s strength was in math and chemistry. He acceded to his father’s advice to major in chemical engineering, even though once he started his studies he didn’t particularly care for engineering. Prem applied to the highly competitive Indian Institute of Technology (IIT), India’s top engineering school. Out of 50,000 applicants, only 1,000 were selected and Prem was one of them.

His years at the university from 1966 to 1971 remain among the happiest of his life. He studied hard, played games after classes, and managed IIT’s sports teams to their first-ever inter-university championship. He made enduring friendships. During his final year, he met Nalini Loganadhan, whom he married a few years later.

By the time he graduated, Prem decided he was more interested in pursuing a career in business than engineering. He applied to the best business school in the country, the Indian Institute of Management. The school received about 10,000 applications for only 100 openings. Prem failed to make the cut the first time he applied. That experience strengthened his resolve to study harder and apply again. He worked for a year in a few jobs, studied, and re-applied. This time he was accepted to the prestigious school.

By then, Prem’s older brother had married a girl from England and settled in London, Ontario, Canada. After discussing it with his father, it was decided that a better opportunity for Prem might be to attend graduate school in Canada, where he could board with his brother and sister-in-law. He left India with only $8 in his pocket and quickly settled in with his brother. He found a job selling air conditioners and furnaces door to door, which funded his MBA at the University of Western Ontario Business School, later known as the Richard Ivey School of Business. “Being an immigrant,” he says, “you develop qualities you never knew you had. You work harder because you’re at the bottom and the only way to go is up. I consider my children less fortunate for not having had the immigrant experience.”

A year after arriving in Canada, Prem was able to send for his fiancé in India. They married upon her arrival and he supported them with his door-to-door sales job. “I wasn’t very successful at first,” he reports. “But I eventually learned how to make a sale.”

After earning his master’s degree, Prem began applying for jobs. He was an immigrant competing with native-born Canadians, and he was having a difficult time finding a position. Finally, in 1974, he was called for a second interview at Confederation Life Insurance Company in Toronto for the position of investment analyst. Out of four appointments that day, he was the only one who showed up and he was awarded the job. It turned out to be a fortuitous appointment. His manager, John Watson, became his mentor and taught Prem all he knew about investing based on Benjamin Graham’s theories of value investing.

After nine years with Confederation Life, Prem and a few partners founded a successful asset management firm, Hamblin Watsa Investment Counsel Ltd. A year later, in 1985, he organized a group of investors to take control of a small Canadian trucking insurance company with $10 million in premiums. That became the base for Fairfax Financial Holdings Limited. With Prem Watsa as its chairman and CEO, Fairfax evolved into a worldwide property and casualty insurance and reinsurance company operating in more than 100 countries, with $5 billion in premiums. Over the past 25 years, Fairfax has increased its shareholders’ equity from $10 million to $8 billion and book value per share has compounded at approximately 25 percent per year. Fairfax’s stock price has followed suit.

“From day one, I wanted to build a good company,” says Prem. “We focused on treating our employees and customers well, and we worked hard for our shareholders. We decided from the beginning that if we were successful, then we would invest in the communities that helped us. We made it a rule that one or two percent of our pre-tax profits would be reinvested back into the communities in which we do business. We have many employees who have been with us for the better part of 25 years. They are terrific people who focus on the long-term. We’ve been very fortunate.”

Prem Watsa is also quick to point out that he is fortunate to have come to North America. “There is unbelievable opportunity here,” he says. “As long as you are willing to work hard and do something about which you are passionate, then there is unlimited opportunity.”

Mr. Watsa defines success on three levels. “First,” he says, “I am a Christian, so faith is very important. Second is my family. I’ve been married for 38 years and it’s the best thing that has ever happened to me. I have three children and I am the proud grandfather of a baby girl. Third is my business success. The most important principle we have in our company is honesty and integrity. We will never compromise those values. Nor will we ever succeed at the expense of our families. I like a quote from the Bible, which says, “What profiteth a man if he gains the whole world, but loses his soul?’ So I have worked hard to keep my values in all that I do.”

Prem credits much of his success to a positive mental attitude. He recalls a time when he was 21 and traveling on a train in India. A fellow passenger gave him a book calledThink and Grow Rich by Napoleon Hill. “The book was a study of people who had become financially successful,” says Prem. “After talking with 500 successful Americans, the author came up with this phrase, ‘what the mind can conceive, the mind can achieve.’ I took from that that success is in your head. If you want to be successful-in whatever field you choose-then you will be. I was very fortunate to be introduced to that book at such a young age. It turned my life around. Now, whenever possible, I give copies of this book to young people I meet.”

Prem Watsa is chair of the Investment Committee of the Hospital for Sick Children Foundation, serves on the Advisory Board of the Richard Ivey School of Business, chairs the Investment Committee of St. Paul’s Anglican Church, and also chairs the Investment Committee of the Royal Ontario Museum Foundation.  He is also the Chancellor of the University of Waterloo.  “My father would have been very happy to see me as chancellor of a university,” he says. “The University of Waterloo graduates the finest engineers and has the largest math student body in the world. I’m very proud to be a part of this school. I believe education is the way to rise above adverse circumstances. With an education, there are no limits to what can be accomplished.”

Prem Watsa is a firm believer in the saying, “To whom much is given, much is expected,” and as a result he and his wife give of their time and money to many philanthropic causes.