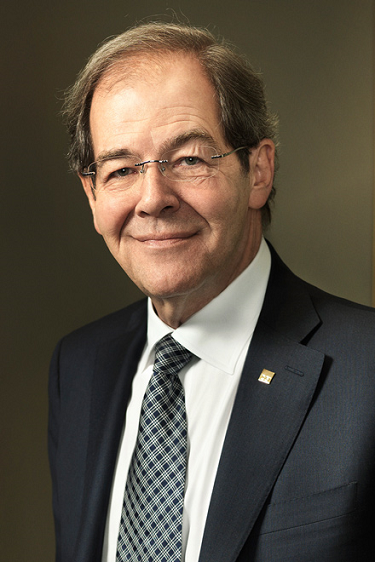 2015 Horatio Alger Award Winner — Founder and Executive Chairman of the Board, CGI

Serge Godin, the fourth of nine children, was born in 1949 in the village of Shipshaw, Quebec, about 300 miles north of Montreal. His father, who attended school up to the fifth grade, owned a lumber business. “My father was an entrepreneur,” says Serge. “He married at 19 and started his own business, which he grew gradually. He was a good businessman, and was close to those who worked for him as well as his clients. He was not satisfied until he saw a smile on everyone’s face. In terms of attitude, all family members learned a lot from him.”

Serge’s mother was dedicated to her family. “She made our home feel cozy,” says Serge. “My parents always took care of people, and helped them in whatever way they could. They taught their children to respect others, to be honest, to work hard, and to be dedicated to whatever project was in front of us and to never give up.”

The family was and still is close knit. “We lived in a rural area,” he says, “so we depended on each other for everything. I enjoyed playing with my brothers and sisters. We also had family nearby. My father had a sister who had 21 children. There were always lots of people around. I had a happy childhood.”

Serge had a god-father who owned a large farm and, and Serge often went there to help with the chores. By the age of 12, the Godin children were expected to work over the summer months. Serge worked in his father’s mill. He enjoyed that experience, especially talking with his father’s customers. When he thought about his future, he couldn’t see himself doing anything other than owning a business. He wasn’t sure what type of business it would be, he just knew he wanted that experience.

When Serge was 16, his father’s saw mill burned to the ground. “My father had no insurance,” he says, “and it was a total loss. All of my brothers and sisters helped to rebuild the business. Everyone got jobs, and no one complained of the work. We put our shoulders to the grindstone and did whatever was necessary to keep the business going.” Serge worked at a convenience store every day after school from six to eleven, and at the local dry cleaners every Saturday from eight to five.

Serge’s older brothers and sisters were well-educated. His prospects for a college education were uncertain in the aftermath of the fire. But Serge was very interested in learning computer technology, which was just being introduced to the marketplace. “Everything at that time said computers were our future, and I wanted to be a part of that,” he says. “This is why I completed a computer science diploma.”

Serge moved to Quebec City. After obtaining the equivalent of a bachelor’s degree in management, and marrying at the age of 20, he undertook partial studies in the masters of business administration (M.B.A.) program at the Université Laval in Quebec City.

Starting his career as an IT consultant, Serge worked for two consulting firms in Quebec City over the next six years. From this experience, he recognized that there was a significant gap in the technology market. In 1976, at the age of 26, and with only one client, Serge founded CGI with $5,000 from his savings account, which he was able to repay after the first year. Within 10 years, he grew the company from two employees to 225, then to 1,200 after 20 years, and 25,000 after 30 years. Over the past 39 years, CGI has grown 50 percent on organic growth and 50 percent on acquisitions. The company has completed 75 acquisitions, all integrated under the CGI business model, growing the company to 68,000 professionals in more than 40 countries. From its early days as an IT strategic consulting firm, CGI gradually developed into a full-service IT business process services company. Today it is the fifth-largest firm of its kind in the world.

“Like my father, I am a client-driven guy,” says Serge. “We are a service business, and I like nothing better than working with my associates at CGI, trying to find a management solution to a client’s problem. I love that because I love to serve. In this business you have to love to work with people, and you have to enjoy working together. This is what inspired the documented dream of CGI into its constitution, which says: To create an environment in which we enjoy working together and, as owners, contribute to building a company we can be proud of.”

Serge’s leadership philosophy is to share decision making with his team members. “In that way we all share in our success,” he says. “There is nothing better in a profession than making sure the people who work there feel as if they are making a valuable contribution and be recognized as such.”

When asked to define success, Serge says, “I’m convinced it’s not money. It is the people who surround you. If they are successful, then you will be successful.”

Another lesson learned in his youth was to never give up. When Serge addresses young people today, he underlines the importance of perseverance. “Young people need to learn to think positively. They should never hesitate to submit and exchange ideas, and ask people what they think, and then listen to what they have to say.”

Humbled by his Horatio Alger Award, Serge says, “I will have to work hard to deserve it.”

Mr. Godin is a member of the Order of Canada and the Ordre national du Québec. In 2008, he was inducted into the Canadian Business Hall of Fame and received the Lifetime Achievement Award from the Canadian Youth Business Foundation. In 2011, he was named an Honorary Associate by the Conference Board du Canada.

Mr. Godin has long been involved in charitable causes. In 2000, he established a family foundation with a mission to alleviate poverty, advance education, and improve the health of disadvantaged children and teens. He has personally funded the foundation in addition to giving his time and other resources. Since its inception, the foundation has helped more than 90 schools, hospitals, and youth organizations.