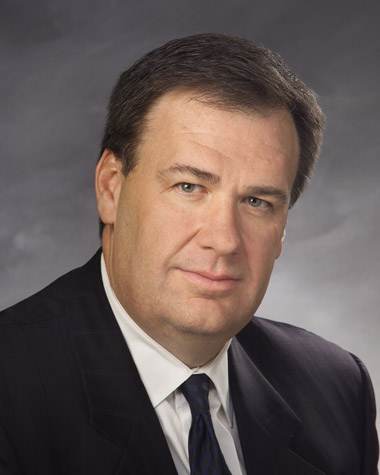 “The secret to success is to be passionate about
what you do every day.”

N. Murray Edwards was born in 1959 in Regina, Saskatchewan, Canada. He is the grandson of immigrants. His father’s parents came from England, and his mother’s parents came from Wales. One was a farmer, the other a blacksmith. “My grandparents were homesteaders,” says Murray. “They came to a place where there were no basic necessities of life, so they had to be entrepreneurial to get established. They had to depend on neighbours, which gave them a sense of collaboration as they progressed. I think I have a sense of those traits—entrepreneurism and collaboration.”

With a lot of hard work, Murray’s father became an accountant and his mother was a primary-school teacher. They raised their three children (Murray is the middle child) simply and modestly in a home that emphasized the importance of education. “My mother would give us workbooks for phonics and language and math, even before we started school,” says Murray. “She was always teaching us kids, and she gave us a real desire to learn. My father was more the taskmaster. He challenged us to succeed and achieve.”

The Saskatchewan winters are long and cold. Like most Canadians Murray grew up playing hockey. He and his friends made an outdoor skating rink at the end of his street. “Sometimes it gets to minus 20 degrees in Regina,” says Murray. “We just had to pour water on the rink, and it would be ready for skating the next morning. I joke today that my hockey skills peaked when I was nine years old. I was one of the top scorers in the city then, but I lost my scoring touch after that. Most players lose their touch in their 30s! It’s a bit of a joke today because I own the Calgary Flames hockey team of the National Hockey League.”

As a child, Murray says that he was curious, adventurous, and passionate about learning—but that did not always translate into being a model student. “I frustrated my teachers, I think,” he says. “I wasn’t always a diligent student or attentive in my classes. I did well academically, but I was always looking for something more challenging or interesting. I asked questions and read a lot, trying to understand a concept. I pushed the limits and tried to go outside the four walls around me.”

For a long time, Murray wanted to be a politician when he grew up. In high school he attended conferences on government affairs and policy. To earn money, he worked throughout high school as a hockey referee, which took him all over the city four nights a week. Upon his graduation, he was as a junior member of the garbage crew at a summer resort. This job provided Murray with strong motivation to succeed in his university years.

Murray first attended the College of Commerce at the University of Saskatchewan. He had several academic scholarships and also took out a few loans to pay for his college education. Each summer he worked, and fondly remembers one summer job at a beer factory, which offered him unlimited beer on his breaks. “The novelty of that soon wore off, though,” he says.

He surprised himself after taking a few business courses—how he fell in love with the concept of markets and their impact on world affairs. He had always wanted to go to law school, but now his political aspirations waned and his interests turned to business. He also became involved in campus politics and served as a student representative.

Murray graduated from the University of Saskatchewan with a Bachelor of Commerce degree with great distinction; and he received the President’s Medal as the most distinguished graduate. He also won the Xerox Canada prize as the most distinguished graduate from the College of Commerce, which is now named the Edwards School of Business, after a major financial gift to the school by Mr. Edwards.

Murray then attended the Faculty of Law at the University of Toronto, where he continued his strong academic success. “I don’t think I was the most hard-working student or among the more diligent,” he says. “I just have a gift for solving problems. I think that is a result of my excellent education. I learned how to think on my feet. To go to university and simply churn out exams is not the best result you want from a college.”

Murray graduated from the University of Toronto with honours in 1983. The day after his graduation ceremony, he drove 30 hours over three days to start work at a large law firm in Calgary, Alberta, called Burnet, Duckworth & Palmer. “I worked hard right from the start,” he says. “I was competing with a dozen ardent associates for permanent slots that would only go to a quarter of us. I worked long hours, but I enjoyed it. It was a learning process for me—and one thing I was quickly learning was that law is a client-driven business that leaves you little time for a life of your own.”

Murray’s hard work quickly paid off, as he became a partner within four years. That’s when one of his best friends became ill. “My friend developed a cancerous brain tumor,” says Murray. “In one year, I saw him undergo six operations and struggle to live through his treatments. But through it all, he continued to do the things he was passionate about, which for him was investment banking. As my friend lay dying, I promised him I would always pursue my passions. For me, the practice of law had good things about it that I enjoyed, but I didn’t feel passionate about it. My friend’s death and my promise to him made me ask myself if this was what I wanted to do for the rest of my life. That’s when I decided at the age of 28 to leave the practice of law and pursue business.”

Murray joined forces with former colleagues to start a merchant bank, with each putting in $100,000— which for Murray was all he had saved since becoming an attorney. They began by looking for investments in the oil and natural gas industry. “Looking back on it, I guess you could say I was taking a big risk with my savings. But I was very excited about business and investment, and I told myself if I failed, I could always return to practicing law. I believed then— and still do—that it’s better to try something and fail at it, than to not try at all.”

Over time Murray Edwards has become one of the most successful entrepreneurs in Canadian history with a wide range of business interests including oil and natural gas, energy services, mining, aerospace, ski resorts, and the National Hockey League—as a co- owner of the Calgary Flames. His enterprises support more than 25,000 direct employees. He is a founding member of FirstEnergy Capital Corporation, a leading investment and banking firm. As chairman of Canadian Natural Resources Limited, which ranks among the top 50 oil companies in the world, he is a leader in the Canadian oil industry.

When Mr. Edwards returned to his alma mater, the University of Saskatchewan, to give a speech to the students, he said that he owes his success to three things. “The first,” he says, “is to have a good team of people. An organization with a CEO that has everything functioning up and down from this one person is an outdated management style. Today it’s more like working in rectangular boxes where a team of people have different skills sets. If you put them in a room together and coordinate those skill sets, you can achieve far more as a whole than as an individual. My particular skill set is being a leader, a challenger, and a motivator.”

The second thing Mr. Edwards believes is necessary for success is to have a plan or a process. “You need a strong vision, a strategic plan, and a budget process,” he says. “And the third thing you need is passion for what you do. Those three things: people, plan, and passion, along with a lot of hard work and a little luck will get you to success.”

When Murray Edwards started his first business, he and his partners had $2 million in the bank. Their first venture was drilling a planned natural gas well, which cost them $1 million and came up dry. “We’d already spent half our money,” he says. “We had to change our approach after that. Instead of the huge risk of drilling another well, we began doing acquisitions of assets with existing production. Fortunately, that turned out very well for us. We invested a few million dollars and within a few years, those assets were worth $200 million. It was a big win. But it showed me that in business you have to be committed to your path, you have to be flexible, and you have to always be on the lookout for other options and opportunities.”

Simply put, Murray Edwards says, “I love what I do. There is a line from the George Bernard Shaw play Pygmalion that says, ‘Happiest is the man who has his vocation for his hobby.’ What I do every day is my hobby, and most days I love it. I think that makes me a very fortunate man.”

Mr. Edwards has provided energy policy advice to the governments of Prime Ministers Chrétien, Martin, and Harper. His commitment to public policy development has included membership on the boards of directors of the Canada West Foundation, the CD Howe Institute, the Banff Centre, and the Canadian Council of Chief Executives.

“My parents always ingrained in me that we were a part of a bigger society, which implied a commitment or obligation to give back—especially when you’ve had financial success,” says Mr. Murray. “I believe education is the great equalizer and so that is where I focus much of my philanthropy. But I also believe that another way to give back is through public service and helping to shape public policy. In North America, we have been blessed on the whole with good government, which is why we have such a high quality of life here. I think we are very lucky to live here.”

In 1999 he was designated by Time magazine as one of Canada’s Leaders for the 21st Century. In 2007 Mr. Edwards, a member of the Order of Canada, was named one of the University of Saskatchewan’s 100 Alumni of Influence.