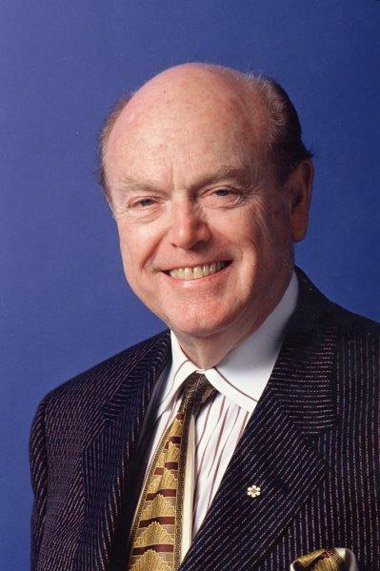 “Nothing will ever be attempted if all possible objections
must first be overcome.”

Jim Pattison was born in Saskatoon, Saskatchewan, Canada, in 1928. His parents were Americans whose families moved to Canada around the turn of the century to homestead. In those days, the Canadian government gave farms to homesteaders who worked the land for 10 years. During the Depression, Pattison’s father, who was then a partner in a car dealership in Luseland, lost everything financially. The family was forced to move to Vancouver, where Pattison’s father earned a living going door to door repairing pianos for $2. Pattison accompanied his father on his service calls to help him, and his mother home schooled him in the evenings. They were living in a rented furnished attic room for $2 a month.

When Pattison was six, his family settled permanently in Vancouver, where his father sold used cars. An enterprising youth, Pattison began working on his own, first by selling garden seeds and then subscriptions to the Saturday Evening Post and Ladies Home Journal. Later, he became a swamper-the person who throws papers off the truck to the newsies. He also worked as a page boy in a hotel. When he was old enough to drive, he became a truck driver for the late edition newspapers.

Pattison worked his way through the University of British Columbia. As a freshman, he worked as a pantryman on a railroad dining car. After that, he worked for a dealership washing used cars. He began refurbishing used cars and selling them for $150 each to students, making up to a $50 profit. When he was nine units short of graduation, Pattison left school to work full time managing a used car dealership.

His employer bought a GM dealership and took Pattison with him to manage the used car side of the business. He worked his way up to new car manager, and then became general manager of the dealership, making $6,000 a year. A customer came in one day and told Pattison he needed someone to manage his pots and pans business, guaranteeing him $50,000 a year. Pattison loved the car business, but felt he couldn’t turn down that much money. “That job taught me a valuable lesson,” says Pattison. “I learned that it isn’t enough to simply make a lot of money. You have to have a passion for what you do to be happy. I made $51,000 that year managing pots and pans salesmen, but I went back to my old GM boss for $12,000 a year because that was where my heart was.”

In 1961, at the age of 32, Pattison got his own GM dealership, taking out a loan on his life insurance and home and borrowing the rest from GM. Four years later, he bought a struggling radio station. With more than $1 billion in sales by 1986, The Jim Pattison Group was deemed the largest company in Canada owned by a single person. That same year, Pattison was chairman, president, and CEO for the World’s Fair Expo 86 in Vancouver, Canada, which attracted 56 countries and 22 million visitors to the city and raised more corporate contributions than the 1984 Olympics in Los Angeles.

Pattison was appointed to the Order of Canada in 1987 and the Order of British Columbia in 1990. In 1992, he received the Governor General’s Commemorative Medal for the 125th Anniversary of Canada. He was inducted into the Canadian Business Hall of Fame in 1996, and the Business Laureates of British Columbia Hall of Fame in 2006. In 2012, Pattison received the Diamond Jubilee Medal commemorating Queen Elizabeth’s 60th anniversary.