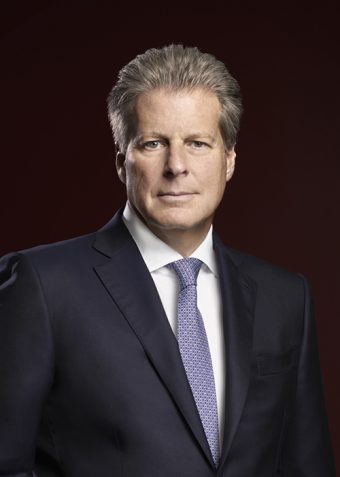 Jay Hennick’s rise to success is characterized by his enterprising spirit, passion, and perseverance. Born in 1957, he grew up in a small town north of Toronto called Bathurst Manor. While the neighborhood may sound exclusive, it was largely made up of working-class families. From a young age, Jay and his three younger siblings were taught that hard work and education were the way to move up in the world.

“My father worked long hours running a jewelry store an hour away from home,” says Jay. “I mostly saw him on Saturday nights and Sundays when the store was closed, making it hard to spend much time together in the early years.”

Jay’s father did not graduate from high school, but he was very “street smart” and taught his children the value of integrity and loyalty. He also inspired them to explore new ideas. From his mother, Jay learned the importance of having passion for everything he does, backed by a great education.

“As a child, I was a handful and needed to be busy all the time,” says Jay. “I was heavily involved in sports and the Boy Scout program, but what kept me most occupied was thinking up new business ideas. I would take out my neighbors’ garbage cans, shovel snow, sell t-shirts at flea markets, and work in my Dad’s jewelry store at Christmastime. My parents always encouraged my ideas, which in turn drove me to work harder.”

At 15, Jay was hired as a summer lifeguard at an apartment complex. “The building manager where I worked asked if I could help staff other buildings with lifeguards, and, before long, I saw an opportunity to start my own business.” Other apartment buildings, condominiums, and hotels needed lifeguards; by providing them, it would fill a huge need for building owners and managers. Seeing the opportunity, Jay asked his father for a $1,000 loan to establish his business. “I knew this was not easy for him at the time, but he was always there for me and had great confidence in my ability to succeed. I still remember him at the kitchen table handing me the money, one bill at a time.”

With this initial investment, Superior Pools was founded, and Jay wasted no time in presenting the business as a professional enterprise. At the local law school library, he used basic precedents from law books to draft a service contract for his customers and printed coloured brochures to market his services. By his third year in business, Jay had hundreds of people working for him—supplying lifeguards and other services. In keeping with his professional approach to business, he rented an office near his high school and spent his days going back and forth between school and his business.

“I loved what I was doing, and I still do,” remarks Jay. “I became a businessman at a young age. I often went to high school wearing a suit when I had meetings with customers to look older and more professional. Some might have seen me as a “nerd” in that suit, but, in actuality, most of the teachers and my schoolmates knew about my business and were supportive.”

Superior Pools was highly successful, and Jay was anxious to focus on his business, full time. When he floated the idea of skipping university for that purpose, his parents wouldn’t hear of it. “As long as I became a doctor, lawyer, or accountant first, I could do whatever I wanted. I respected my parents and valued their input, so I decided to enroll at York University.”

Jay earned his undergraduate degree in 1978 and then a law degree at the University of Ottawa in 1981. Following university, he spent 13 years working as a corporate and securities lawyer. Looking back on his time as a practicing lawyer, Jay says, “Those years were a great way to gain firsthand experience from people who were making things happen. They were buying companies, taking them public, doing takeovers, and everything in between. I learned how to handle myself in different situations, to negotiate, and to sell my ideas to others. The years practicing law were invaluable to me later in my business career.”

After more than a decade working as a lawyer, Jay felt it was time to return to his entrepreneurial roots. In 1989, he rolled Superior Pools, which was still operating and highly successful, into a newly established business called FirstService Corporation to pursue broader opportunities in the service sector. “I knew the industry well, and it was underappreciated, providing me with tons of opportunity.”

Jay grew FirstService into the largest manager of multifamily residential communities in North America and one of the largest owners of well-known franchise brands. One acquisition, Colliers International, was poised for growth as an independent public company, so in 2015, after nearly 20 successful years as a public company, FirstService split into two companies. Jay remains the Founder, Chairman, and controlling shareholder of FirstService and also serves as the Global Chairman, CEO, and controlling shareholder of Colliers, which is one of the top global players in commercial real estate and real estate investment management, with operations in 68 countries.

Throughout his life, Jay’s enterprising and entrepreneurial drive has uncovered unique and fruitful opportunities. It hasn’t gone unnoticed. In 1998, Jay received Canada’s coveted Entrepreneur of the Year award; in 2001, he was named Canada’s CEO of the Year by Canadian Business magazine; in 2018, he was appointed a member of the Order of Canada, one of Canada’s highest honours.

His steady rise in the business world wasn’t without its difficulties. Shortly after establishing FirstService, when he was in his mid-30s, Jay was diagnosed with thyroid cancer. “Everything was going great, until it wasn’t,” he says. “I had a great wife and three young children, and now I had to worry about what would happen if I wasn’t around. Thankfully, the cancer was removed. I figured I had a brush with fate. But, as it turns out, lightning does strike twice.”

A few years later, Jay was diagnosed with a brain tumor. “I couldn’t believe my luck, life seemed really unfair. This time required a more challenging operation, which has had some lasting effects. I am deaf in one ear and have to regularly monitor my health but am otherwise well and thankful to have overcome these obstacles,” said Jay. “The lesson for me in these experiences is that everyone faces some adversity in life—whether it’s in your upbringing, your personal life, or with your health. You never know what the future holds, and the key is to not let the circumstances get you down. Always stay calm, treat things as positively as you can, and then tackle the problem head on, one step at a time.”

Throughout his life, education and healthcare have played important roles. In 2008, Jay and his wife of 38 years, Barbara, established The Jay and Barbara Hennick Family Foundation to support education, health care, and the arts. Through this Foundation, he and his wife have funded The Hennick Centre of Business and Law at York University, which provides scholarships for students wishing to pursue post-graduate studies in business or law, and they have a similar program at the University of Ottawa. “Barbara and I believe in the importance of a higher education. Once you have a basic education, it’s important to learn a profession that you are passionate about. Education should also be balanced with a good amount of work experience. If you want to go into business for yourself, I would suggest working for an established business where you can see how things are done, gain practical experience, and learn about meeting commitments to those you work for and with.”

Jay lives his life in perpetual motion. “You should always be passionate about what you do and strive to make things happen,” he says. “If you have a decision to make, make it. Try not to get weighed down in the details and let the opportunity pass you by. One of my favorite quotes is from my mentor, the late Peter Drucker, the most well-known business author of all time. He says, ‘The best way to predict your future is to create it.’’ I’ve tried to live my life by making a difference and believe that is one of the keys to my success.”

When asked about his International Horatio Alger Award, Jay is honoured and humbled. “The Canadian Association is only 10 years old, has an esteemed membership, and has already changed the lives of so many students,” says Jay. “I am honoured to have the chance to pay it forward, giving young people the opportunity for higher education, and to work with so many other accomplished members. Horatio Alger is a wonderful organization, and I’m thrilled to join its ranks.”