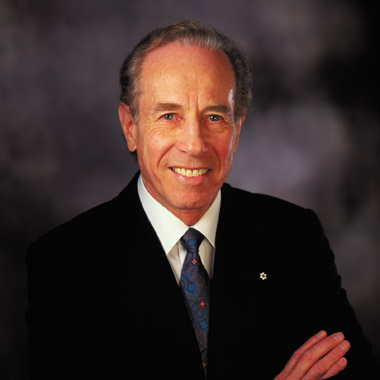 “Go with your heart because if you feel good about what you do, then you will do it well.”

Isadore Sharp, the third of four children and the only boy, was born in 1931 in Toronto, Ontario, Canada. Both his parents were immigrants from Poland. They lived in a Jewish ghetto, where they rented many houses during Isadore’s youth. By the time he was 16, he had moved with his family 15 times.

Isadore’s father was a plasterer by trade and worked mostly in construction. “My father was very hard working,” says Isadore. “I remember a time when he was excavating a basement with the use of a horse and plow because he had no mechanical equipment. He broke his shoulder doing that, but just continued working relentlessly. He was a quiet man and the most tolerant person I’ve ever known—never judging anyone and always accepting life’s reversals with equanimity. Max was very gentle and never raised his voice or his hand to any of us; there was no need, because his quiet way was very commanding.”

Isadore’s mother came to Toronto when she was 16. Her brother, who had immigrated before her, arranged for her to marry Isadore’s father, Max Sharp. At first, she would have none of it. “My mother had her own mind,” says Isadore. “But my father won her over, and theirs was a love affair that never ended. Both my parents lived long lives, but my mother died first. After she passed away and was being wheeled from the hospital room, my father said, ‘Look at her, isn’t she beautiful?’”

Isadore describes his mother as the complete opposite of his father. “She was the boss of the family,“ he says, “and she ruled with an iron hand. But my parents imbued us with confidence and healthy self- esteem. They taught us the importance of family, and my sisters and I learned our values and principles not so much by what my parents said, but more by what they did.”

The Sharp family lived as typical immigrants, working hard to slowly make a living and get ahead. Isadore’s father would build a house and the family would move into it, then his father would sell the house and the family would move into a rental or in with relatives. “We didn’t have much money,” says Isadore, “but we always had a place to sleep—even though we might be three in one room. I remember a time when we had sold our house, and my mother called her sister and told her we needed to come and live with her for a time. We were a family of four kids and a dog, and my aunt had four kids and a dog in a three-bedroom house with only one bathroom. My mother didn’t ask if we could come, we just showed up and knew her sister wouldn’t mind. We lived there for about six months. It was expected that they would help us, and they did so with no questions asked. That is how immigrant families survived.”

As a boy, Isadore was strongly drawn to sports and he became a good athlete, but he was expected to work at an early age. His first job was selling Liberty magazines door to door when he was only eight. A few years later, he made deliveries on his bicycle for a local pharmacy. One summer, he set up pins in a bowling alley. As a teenager, he spent each summer working in a restaurant at the beach. But since his father worked in construction, there was the opportunity to follow in his footsteps, given that Isadore had no burning desire to take any other career path. And with his athletic talent, he liked physical labor and enjoyed construction. Following high school, Isadore attended Ryerson Institute of Technology, where he earned a diploma in architecture in 1952, was awarded the Silver Medal for academic proficiency, and was also Athlete of the Year.

“I had no intention of becoming an architect,” says Isadore. “I went to Ryerson because I thought it would help me in the building business. My father helped me a great deal by giving me complete charge of my projects. He understood that you need to let people have the space to become what they might be. I enjoyed construction and slowly became pretty good at it.”

At one point early in his building career, when he was 25, a friend of Isadore’s asked him to build a small motel on the outskirts of the city. It was a 14-room motel that looked like a large house. Isadore recalls, “I suggested he double the size but only finish the exterior, then he could put a large sign on the roof of the motel, which could be seen from the nearby freeway. Soon, I had to finish the extra rooms because the business was booming. I began to think that it would be interesting to see what would happen if you combined the concept of a motel-hotel downtown. It would be a place that would have the convenience of driving up and checking in like a motel, but it would also have some aspects of a hotel.”

By now, Isadore was married and struggling to make a living building houses. Over the next five years, he used his evening hours to convince potential investors about the validity of his hotel-motel concept. Isadore’s break came when the mortgage lender he worked with to finance his housing projects told him that if he could raise 50 percent of the financing for his hotel project, then he would give Isadore the remaining 50 percent.

It took a great deal of perseverance and overcoming several rejections before Isadore achieved his goal. Finally, in 1958, he bought a piece of land in the red-light district of Toronto, which made it affordable. Even though the neighborhood was a somewhat depressed area, Isadore thought it was a good location because it was near the sports arena and downtown Toronto. He built 125 rooms that faced an inner courtyard to distract from the seedy neighborhood. It opened in 1961 and was an immediate success.

Isadore soon realized that the people using his hotel were enjoying the courtyard and the pool, which got him thinking about his next property. He wanted it to be a resort in the middle of the city. Isadore says, “Landscaping plays an important role in creating an environment. As a building ages, landscaping improves. So that has been the way I created Four Seasons— good-looking architecture with landscaping that complements it.”

Isadore built his third hotel, Inn on the Park, in London in 1970, and it was the success of this project that clenched his career as a hotel owner/developer. Today, the Four Seasons Hotels and Resorts includes 91 properties in 36 countries, with more than 60 under development, putting it on every continent except Antarctica. In 2007, the company went private for $3.4 billion, and Mr. Sharp remained chairman and chief executive. In 2009, he wrote a book, Four Seasons: The Story of a Business Philosophy, which details the history and philosophy of the company.

On a personal level, Isadore credits his parents with giving him a value system and self- confidence that allowed him to develop his full potential. He says, “My parents did not know the words of the Golden Rule, but they lived by it. That’s how values are embedded—you are taught not necessarily by what your parents say, but how they act.”

Isadore relied heavily on his childhood values when his third of four sons contracted cancer at the age of 17. “He was only given a two percent chance of survival,” says Isadore. “When he died, it was a tough time for all of us, but my wife, Rosalie, and I vowed we would not allow this tragedy to make it worse for the entire family or for our relationship. We decided to bear our burden, but not put that burden on our other children. That’s how you make it work, but you never forget. To this day, I say a morning prayer for my son.”

Isadore Sharp measures success more in the people whose lives he has touched and helped than in material possessions. The Four Seasons employs 35,000 people, and he takes great pride in knowing that his business has enriched the lives of so many.

Isadore is often called on to address young people. His advice to them is to get as much education as possible. “After that,” he says, “let your passion be your guide. Go with your heart because if you feel good about what you do, then you will do it well. I also tell young people to never use the word ‘if,’ such as in the case of: I would have done better if… Always do your best and then there is no if; there is no excuse.”