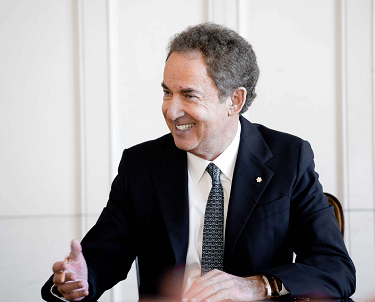 2016 Horatio Alger Award Winner — Chairman of the Board and CEO, Onex

“Do something you love doing. Making money should not be the goal.”

Gerald “Gerry” Schwartz was born in 1941 in Winnipeg, Manitoba, Canada. At the time, his father was serving with the Canadian Air Force. He was stationed in Canada, which allowed him a few trips home during the war years, but Gerry didn’t live with his father on a daily basis until he was four. Gerry and his parents lived in his maternal grandmother’s home until he was nine. Gerry’s father was a trained pharmacist, but within a few years he left that career to work with his three brothers-in-law in a business started by Gerry’s grandfather, who died when Gerry was quite young. “It was a small enterprise that had everything to do with car parts,” says Gerry. “They rebuilt engines, did wholesale distribution, and also had a retail shop. It made enough money to support my uncles and our family.

When asked about his father, Gerry doesn’t hesitate to say, “He was fantastic. He taught me a lot about life, people, and business. He was a good businessman and sparked an interest in business for me at an early age. He used to tell me not to expect things to come easily. He was a man who believed in hard work, self-discipline, and ambition. We had a great relationship and I loved him dearly.”

Gerry’s mother was acutely deaf. She could hear somewhat with hearing aids, but he believes her disability kept her somewhat distant. “She was a quiet person,” says Gerry. “I would probably say I had a closer relationship or was influenced more by my grandmother. Regardless, I had a happy childhood that was largely fueled by my close relationship with my father.”

A curious child, Gerry—like his parents—read a great deal. He also enjoyed his many friends and sports, especially baseball and basketball. He knew from an early age that he wanted to be involved in some sort of business when he grew up, and he was a bit of an entrepreneur in his youth. He remembers one year when the circus came to town; he got a job carrying water to the animals. He also created his own backyard circus for the neighborhood children. He put up posters announcing his circus and charged a nominal fee for the event. By the age of 10, he began working behind the counter in his father’s store. When he was a little older, he worked in the distribution side of the business. “I liked hanging around the store,” he says. “I liked working there.”

When he was 17, Gerry and his friend started a clothing store. The previous owner of the shop died, and Gerry saw an opportunity. “We cleaned up the store, named it The Stag Shop, and opened for business,” he says. “I worked there on Friday nights and weekends for the next couple of years.

School had always been easy for Gerry. He received good grades, and it was always assumed he would attend college. During his undergraduate years at the University of Manitoba, he lived at home. At that time he invested in a carpet store with a friend, using the proceeds from his clothing shop. “We had carpet stores in Calgary and Edmonton. My friend ran the stores. I didn’t earn any money from the stores until we sold them.”

Gerry didn’t much enjoy his undergraduate classes. In those years, he felt more engaged in his own entrepreneurial dealings and in his father’s business. Following his graduation, Gerry married, moved out of his parents’ home, and began law school at the University of Manitoba. He didn’t plan to practice law but wasn’t sure what else to do in the immediate future. From the start, he excelled in his classes. “Law school was much better for me than my undergraduate experience,” he says. “I got a job with a tax firm, and I really excelled at it. I worked incredibly hard.”

During his first year of law school, Gerry started a coin business, which sold government-issued mint sets. He did very well the first couple of years and made a few hundred thousand dollars. However when the government changed their policy involving mint sets in 1964, after Gerry had already purchased a large number of sets, the price went from $30 per set to less than $3. “I lost about all I had made in the previous two years,” he says.

Gerry’s employer at the tax firm became a mentor to him, giving him a wide range of experiences denied to most law students. He was earning $25,000 a year, compared to his classmates whose internships paid only $200 a month. He completed his law degree in 1966, worked full time as a lawyer for two years, and then left to attend Harvard Business School.

“I loved my time at Harvard,” says Gerry. “I love Canada, but I’ve always been an Ameriphile, and I loved being in America. I learned so many new things I had not been exposed to before. I learned about finance, social psychology, marketing. I liked my fellow students and the professors. It was one of the most wonderful experiences of my life.”

Upon completing his master’s degree in business, Gerry’s plan was to get a job on Wall Street. He received several offers, but when a former professor—who was a partner in a land sales company in Florida—offered him a large package with stock options, he took it. “I got greedy,” says Gerry. “I thought I would make some quick money on the company’s rising stock, but it was a dumb move on my part. I hated it. I didn’t like anything about it once I got there and knew I’d made a big mistake.”

Gerry was fortunate that the president of a securities firm he had interviewed with previously called to offer him a job at the firm he had just acquired. “I couldn’t say yes fast enough,” says Gerry.

Shortly thereafter, in 1971, Gerry received an offer from Bear Stearns. He worked there until 1977, specializing in mergers and acquisitions. When an opportunity was presented to be a full partner in a new venture, Gerry accepted. He and his partner started CanWest Capital Corporation, and Gerry served as president of this major Canadian media company based in Winnipeg.

In 1984 Gerry and his associate dissolved their partnership, and Gerry took with him the industrial assets of CanWest to start his own company, Onex. For the first year, he worked out of borrowed offices that had no windows. His workforce included Gerry, his assistant from CanWest, and his secretary. “It was a scary time for me,” he says. “I had to raise money, and I didn’t know for sure that I could do it. I had to find businesses I wanted to run, make better, and then be able to sell them again. I started with an empty plate.”

Today Onex is one of the oldest and most successful private equity firms in North America. The company manages more than $22 billion of assets, including $6 billion of its own proprietary capital. Over the years, Onex has built more than 85 operating businesses and completed hundreds of add-on acquisitions with a total value of approximately $61 billion.

“My secretary was with me for 24 years, and my assistant became the chief financial officer of Onex,” says Gerry. “We built a wonderful business with wonderful people. I love what I’m doing and with whom I’m doing it.”

While integrity is of utmost importance to Gerry, he believes that much of the success of Onex was giving his employees room to grow and develop. “I have seen many of my colleagues at Onex do well financially and in their personal lives, which is very satisfying to me. That is how I define success—people close to me, including my four children, building their own lives and making their way in the world. I always told my children when they were growing up to pursue something they love. Making money, I told them, should not be the goal.”

Another piece of advice Gerry shares with young people is to keep growing. “You have got to put yourself into a position where you’re back in kindergarten, learning,” he says. “Whenever I am learning about a new business or an industry I have not dealt with previously, I am back in kindergarten learning all I can about it and how it works. That approach has allowed me to grow as a person.”

When asked about his Horatio Alger Award, Mr. Schwartz says, “I am honoured by it, of course. I am especially happy about the Horatio Alger scholarships, as I love helping young people get an education. If you are undereducated, you will have a tough time in life.”

In 2005 Gerald Schwartz was made an Officer of the Order of Canada, and in 2004 he was inducted into the Canadian Business Hall of Fame. He has received numerous other achievement awards, as well as several honorary doctorates.

Gerry and his wife, Heather Reisman, donated $28 million to Mount Sinai Hospital in Toronto, where Mr. Schwartz served as vice chairman. He was a founder in 2004 of the Canadian Council for Israel and Jewish Advocacy. He started the Heseg Foundation in 2005 for lone soldiers—servicemen or women without immediate family in Israel. Heseg has provided full tuition and living expenses to more than 1,300 scholars. He also sponsors exchange programs between students at Canadian and Israeli universities. Mr. Schwartz is a supporter of St. Francis Xavier University in Nova Scotia, where the business school is named for him.

Gerry and his wife were both raised with Tzedakah (charity) being part of their daily family life. “My father was always involved in the community and doing things for others,” he says. “He was generous in a way that was appropriate within his means. I spend a significant amount of time in philanthropy, and I find the work Heather and I are doing with the Heseg Foundation hugely gratifying.”