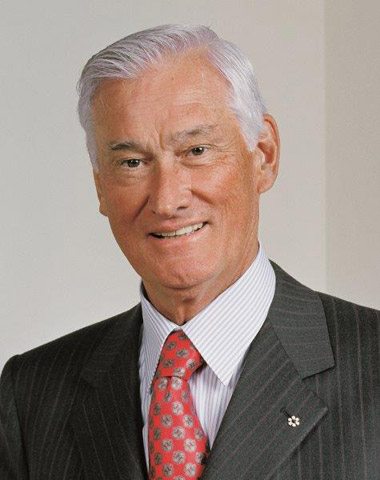 Wallace McCain was born in Florenceville, New Brunswick, Canada, in 1930. His ancestors had settled in the area and farmed potatoes, and other crops for several generations. While money was always scarce, Wallace kept at his studies and graduated from Mount Allison University.

The McCain family was tight-knit, and, as the youngest children, Wallace and his brother Harrison were particularly close. After each had finished his university studies, they both worked for the same company and dreamed of “going into a business together.” They were exploring various options when their older brother Bob suggested processing frozen French fries. They knew nothing about processing frozen French fries, nonetheless, with their savings, and small investments from their two older brothers, in 1956, they built a small potato processing plant in a cow pasture, determined to learn the business from the ground up.

This was the start of McCain Foods Limited, which would grow to become one of Canada’s leading businesses. Wallace and his brother Harrison ran the company and their two other brothers served on the board. By the early 1960s, they had cornered the frozen French fry market in Canada. Noting the long-standing popularity of French fries in the United States, they initially bypassed that market and expanded operations to England. They then built plants in the United States, Australia, the Netherlands, Belgium, Poland, France, and in countries around the world. Today McCain Foods Limited is the world’s largest producer of frozen French fries. In addition to expanding geographically, they also increased their product lines to include frozen juices, pizzas, and other food items. McCain Foods employs more than 20,000 people on six continents and has annual sales of $6.4 billion, generated from customers in 110 countries. Business professor Jan Grude is quoted in a New York Times article stating, “McCain Foods is one of the greatest single-generation success stories in Canadian business history.”

While the business continued to grow, Wallace and his brother Harrison parted ways in 1995, following a dispute over who would head the company when they retired. While maintaining his shares in the family-owned company, Mr. McCain left to acquire the publicly owned Maple Leaf Foods, Inc., another leading Canadian food processing company with sales of $5.9 billion in 2006 and employing approximately 22,500 people at its operations across Canada and in the United States, United Kingdom, and Asia. Mr. McCain held the position of Chairman. His sons Michael (President and CEO) and Scott (President and COO, Agribusiness Group) were also part of the executive team.

Aside from being the major employer, the McCain family helped their New Brunswick community to prosper in other ways. Wallace McCain’s wife, Margaret McCain, served as Lieutenant-Governor of New Brunswick from 1994 to 1997. Together, they supported a host of charitable causes including a major gift to Wallace’s alma mater, Mount Allison University, and a $2 million contribution to establish a business institute at the University of New Brunswick.

Wallace McCain received numerous distinctions and honours, including honorary degrees from Mount Allison University, University of King’s College, the University of New Brunswick, Trent University, and University of Toronto. He was also made an Officer of the Order of Canada (1995), inducted into the Canadian Business Hall of Fame (1993) and the New Brunswick Hall of Fame (1997), selected as the Canadian International Executive of the Year (2003), and received our Country’s highest honour: “Companion of the Order of Canada” (2008).

Wallace McCain stated that there are two speeds in business, “backward and forward.” During McCain Foods’ 50th anniversary celebration, Mr. McCain quoted from Sophocles and said, “One must wait until the evening to see how splendid the day has been. It’s been a splendid day. Tomorrow will be even better!”