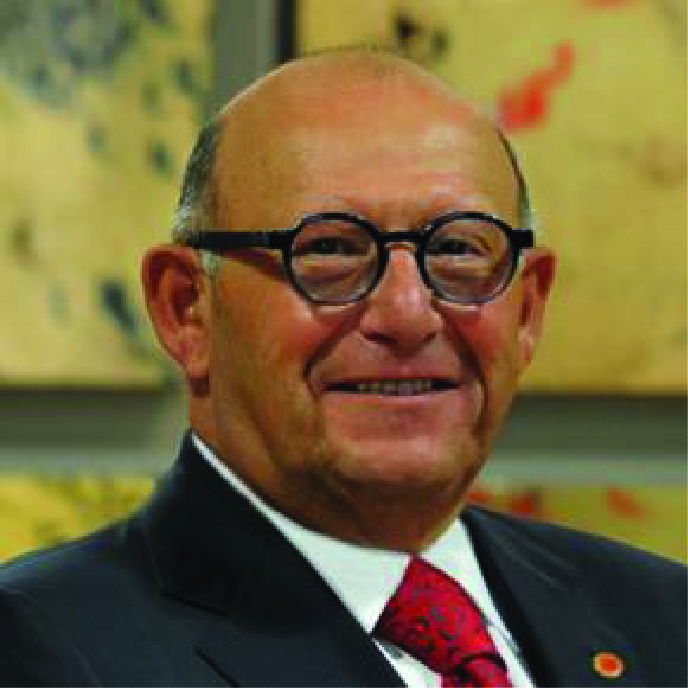 “Be self-reliant and never think of yourself as a victim of your circumstances..”

The son of Holocaust survivors, Edward Sonshine was born in 1947 in a Displaced Persons camp in Germany, which had been converted from the Bergen-Belsen concentration camp. When Edward was two, his parents’ immigration papers came through and the family moved to Toronto, Ontario. Edward’s father began working as a house painter for a builder and eventually became a house builder himself. “My parents met and married in the Displaced Persons camp,” says Edward. “My father was the only one of 11 children to survive the Holocaust. My mother and two of her brothers were the only to survive out of 10. They were both anxious to start a new life that focused on our family life.”

Edward grew up associating with other children of Holocaust survivors. “I was 14 before I met a parent who didn’t have an accent,” he says. “We were a closeknit community.”

The war interrupted and ended Edward’s father’s high school experience. As a result, he was determined that his two sons would get an education, which he believed was something no one could ever take from them. Edward didn’t particularly enjoy grammar school, but he did well in his classes. After completing the first grade, he was skipped to the third and after completing the third grade, he was skipped to the fifth. In high school, his younger age made his social life awkward, but by the time he graduated, he felt the age difference no longer mattered.

Edward had a paper route when he was 10, but by the time he was 12, his father encouraged him to get a summer job. Edward helped his father on his building sites until he was 15, at which time he got a job at a lumber yard. His father believed in hard work and taught his son that no one could be successful without it. But physical labor was not Edward’s dream job. Influenced by his favorite television show, Perry Mason, Edward decided he wanted to be a lawyer.

He earned his undergraduate degree from the University of Toronto and his law degree from Osgood Hall Law School, where he was one of the top 10 students. He began his career as a criminal lawyer, but soon realized he wasn’t fond of defending delinquents. He quickly switched to corporate and real estate law, which he enjoyed for the next 15 years.

Career
When Edward left his law practice, he was a managing partner in a firm that had grown from 8 to 60 lawyers. In 1983, he was named Queen’s Counsel. “I had enjoyed being an attorney, but eventually grew tired of it,” he says. “I wanted to try doing what my clients were doing in real estate, which I felt I could do at least as well as they could. By then I was married and had three children. I told my wife what I wanted to do, and she was very supportive. But I didn’t tell my mother—who was so proud of my being a professional—for about five years.”

Edward went into real estate in 1987, which was a good market. But by 1989, the country was in a deep recession and the real estate market was depressed for the next five years. Edward remembers, “It was the worst real estate market for both Canada and the United States since the Great Depression. Interest rates were in the double digits. I was heavily leveraged, and I thought about returning to practicing law—but I didn’t.”

In 1993, Edward bought the management of a mutual fund called Counsel Real Estate. He turned that into the second real estate investment trust (REIT) in Canada. In 1994, he took the trust public under the name RioCan, which had $80 million in assets. “I started building the company deal by deal,” says Edward. “I spent the first three years knocking on a lot of doors explaining to people what a REIT was. I was just looking to make a living, and I was worried about bringing home groceries.”

Today, the company has a value of $14 billion and is Canada’s largest REIT. RioCan owns, manages, and develops more than 200 retail-focused, mostly mixed-use properties in high-density areas. In 2011, Sonshine was invested into the Order of Ontario. In 2013, he was awarded Canada’s Outstanding CEO. In 2021, he retired from his duties as CEO and now serves as Chairman.

What I’ve Learned
From the time he was a boy, Edward was taught the importance of having financial security. He worked hard throughout his career, and admits his work/life balance leaned heavily on the work side. But integrity also played an important role in his career, and he is proud that he made a good living in an honorable way. “I had a good name that I wanted to pass on to my children,” he says. “That was always very important to me.”

When he defines success, he says, “Giving financial security to your family is number one for me. My family is equally important. I have three children and nine grandchildren. Watching them grow and succeed is what I call success.”

Recently, Sonshine gave an address at a university convocation. His advice to the graduates is to be self-reliant and never think of themselves as victims of their circumstances. “My parents could have thought of themselves as victims,” he says, “but they didn’t dwell on the adversity they experienced during the war. Instead, they came to this country and made a new life for themselves. They couldn’t speak English, but they just kept putting one foot in front of the other. They worked hard and they always looked forward. I think they set a good example.”

Sonshine believes there is no substitute for working hard. “You have to earn your way,” he says. “I also believe you should never stop learning and being curious about the world in which we live.”

Philanthropy is a passion for Edward Sonshine. His community involvement includes organizations such as Mount Sinai Hospital in Toronto, the Israel Bonds Organization of Canada, and United Jewish Appeal. He is especially excited about endowing a chair at a Toronto university law school, which includes instruction about the adverse effects of antisemitism.

Honored by his Horatio Alger Award, Sonshine says, “I like the Association’s focus on helping young people to attend college, encouraging them to get ahead through education. In today’s world, that is needed more than ever before. I’m happy to be a part of that.”