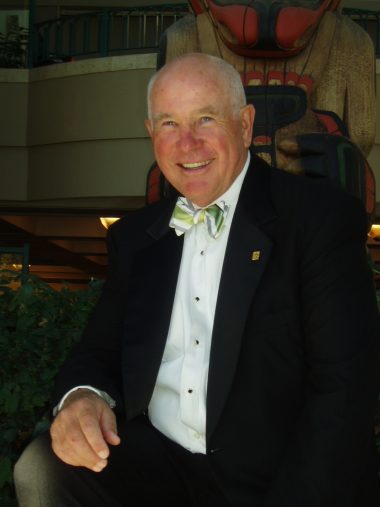 “The most important thing is to never give up. You will learn that the more you try, the easier it gets.”

David Ritchie is the youngest in his family of six children. By the time he was born in 1936 in Kelowna, British Columbia, his father had lost all he owned. A practicing attorney, Ritchie’s father had become embroiled in a legal battle against agricultural co-ops. He failed to win that fight and, as a result, was disbarred and forced to give up his ownership of several orchards. Penniless, the Ritchie family moved into a rented home on a tobacco farm, and Ritchie’s father eventually found work as a fruit inspector.

“My family was going through a very rough time when I was young,” says Ritchie. “We often ate nothing but porridge two or three times a day. We all tried to help as much as we could. I remember as a little wee boy joining my brothers and sisters to pick potatoes. We earned six cents for one sack of potatoes.”

In 1939, Ritchie’s father enlisted in the army when Canada joined in the fight against Hitler’s invasion of Poland. A veteran of World War I, he was not sent overseas, but was away from the family for a number of years. Later, Ritchie’s older brother was killed in the invasion of Normandy on D-Day. “That was a very sad time for my family,” says Ritchie. “He was the oldest son and my father was bitter over his death.”

When Ritchie was six, his family bought a modest home in Kelowna that had a monthly mortgage payment of $25. “Kelowna was a great place to grow up,” he says. “Even though we were poor, we were a happy family. My mother had a beautiful singing voice and she played the piano and sang to us. My father was a little more serious, especially after my brother’s death. He made us listen to the news every morning and evening on the radio. He mounted a large map on the wall in our kitchen and when something happened in the world, he would take us to the map and show us where it was. I got a great command of world geography. We may have had nothing, but I never felt poor. I had a positive outlook and a deep appreciation for all I did had.”

When he was 12, Ritchie went to work on a farm three miles away. His job, which lasted for the next three years, included herding cattle, milking cows, and weeding corn. He worked all day at hard labor and earned $2 for his efforts. To get to work, his father bought him his first bicycle for $8. “It wasn’t much of a bike,” says Ritchie. “I went to the bicycle store and was able to talk my way into trading my bike plus eight $5 payments for a Hummer from England. I made the payments faithfully and owned it by the end of that summer. That made me the proudest kid in Canada. From then on, I always had cash in my pocket. I’d get up early on Sunday morning and go to the park to collect beer bottles, which I traded in on Monday after school. I loved to sell things and did a lot of door-to-door sales in Christmas trees and greeting cards. I was happy to have these jobs. They taught me the importance of self-reliance and the value of hard work. When you live with poverty, everything you get looks better and tastes better and you deeply appreciate every little thing that comes your way.”

After he came home from the war, Ritchie’s father bought part interest in a second-hand furniture store. A year later, he bought out the other partners for less than $2,000. His father’s store, the OK Used Furniture Store, fascinated Ritchie. He was excited to get to the store after school each day to see what had been bought or sold. It became Ritchie’s responsibility to keep the store’s potbellied stove going and the floors swept. But by the time he was in high school, the store was struggling and his father owed the bank a $2,000 payment on a $20,000 loan. They knew they weren’t going to be able to make the payment unless they could sell a lot of furniture in a short amount of time. They decided to hold an auction and by the end of the day they had their payment and a new way of doing business.

In 1958, three years after he graduated from high school, Ritchie and his two brothers took over the business from their father and renamed it Ritchie Bros. Auctioneers. The company went public in 1998, and today’s annual sales exceed $2 billion. Ritchie Bros. Auctioneers is the largest industrial auction company in the world with 110 offices in 25 countries. Ritchie stepped down from serving as CEO in 2004, but continues to serve as chairman of the board, and he is the company’s largest shareholder. In 2005, he was recognized as the Entrepreneur of the Year by the faculty of business at the University of Victoria in British Columbia.

Ritchie hopes that young people will develop confidence in their ability to overcome their difficult start in life. “The most important thing is to never give up,” he says. “You will learn that the more you try, the easier it gets. It’s a simple philosophy. I believe that when you work hard, you pave the way for luck to find you.”