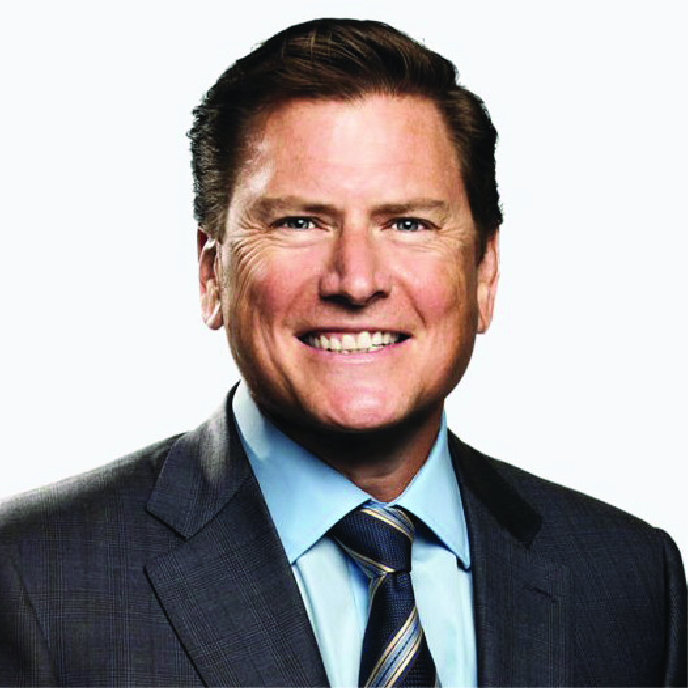 “Success is making a meaningful difference in the things I care about, and living up to the responsibilities that are bestowed upon me.”

Darren Entwistle was born in 1962 in Montreal, Quebec, the only son of Dorothy Greenshields and Desmond Entwistle.

Dorothy came to Canada from Scotland with her parents and 12 siblings, bringing with them Ayrshire cattle and, thereafter, working as labourers. Dorothy was the widow of a World War II veteran, and already had two daughters when she married Darren’s father, Desmond. “That is how I ended up with three mothers,” says Darren. “My older sisters took care of me, teased me endlessly, and showed me the right path in life.” Unfortunately, when Darren was only seven years old, Dorothy was diagnosed with cancer and, after a brave five-year fight, she lost her battle when Darren was 11; his older sisters were a great consolation to him during this difficult time, as was his father, Desmond.

Looking back, one might say that the apple did not fall far from the tree: Desmond worked as a lineman for Bell Canada for 40 years. Darren says, “He was my mentor. He helped me get through many adversities along the way. My father was a big believer in technology and all it can do to make people’s lives better, but he often told me we should not let technology crowd out the humanity in our society. He taught me to care about others.” Sadly, Darren lost his father in 2004 to cancer. His passing stemmed from a severe allergic reaction to penicillin; medication that was erroneously administered while his father was being treated for leukemia at the hospital. This tragic and preventable error further inspired Darren to make a meaningful difference in the lives of people, specifically in respect of the transformation of healthcare and digitization of health information.

While some might blame hardships for their circumstances, Darren believes that the challenges in his life – including the loss of his mother at an early age and his humble beginnings – were a learning opportunity. He believes that adversity gave him a sense of passion for his future and he reasons that those difficulties contribute to his sense of permanent dissatisfaction with the status quo today.

In fact, Darren believes wholeheartedly that lifelong learning and continuous improvement are key to realizing one’s full potential. Driven by his passion for personal development, in 1986, Darren earned a bachelor’s degree with honours in economics from Concordia University. He went on to receive his MBA in finance from McGill University and then a diploma in Network Engineering from the University of Toronto, ultimately carving his path for a future in telecommunications.

Career
During his post-secondary years and early in his career, much like his father, Darren was a telephone installer and repairman, eventually moving into management. In 1997, he became Chief Commercial Officer for Cable and Wireless Communications, a British telecommunications company and, in 2000, at the young age of 37, joined TELUS as President and Chief Executive Officer. He is now the longest-serving CEO in the telecommunications industry, worldwide, and has evolved TELUS from a regional telephone company serving Western Canada into a global communications and information technology leader.

Under Darren’s leadership, TELUS has generated a total shareholder return of 1,693 per cent over the past 20 years. This is number one in the world amongst TELUS’ telecom incumbent peers, outperforming the TSX by 1,309 percentage points and the MSCI index by 1,492 percentage points. Moreover, TELUS’ total shareholder return has surpassed the TSX every year over the course of the past five, 10 and 15 years, by an average of 87 per cent. In addition, throughout the past 22 years, TELUS’ enterprise value has quintupled to $71 billion and EBITDA has more than doubled to over $6 billion. During this same timeframe, the TELUS brand has increased in value from a few hundred million dollars to $10.1 billion today, ranked as Canada’s most valuable telco brand according to Brand Finance, the most trusted telco brand and one of Canada’s Most Authentic Brands by the Gustavson School of Business, and as 2021 Brand of the Year by Strategy Magazine.

When Darren first joined TELUS, he had a goal. “I didn’t want to just have a well-run regional organization,” he says. “I wanted TELUS to be the best in Canada and thereafter, the best globally in telecommunications. It was an ambitious but exhilarating task.” But it is a goal he certainly achieved and he credits the TELUS team for that.

Darren believes that an organization can only surpass its potential through teamwork, saying that, “The 130,000 employees at TELUS serve as my mentors. It’s the people who work here who invent technology; and it’s the people who deploy the technology for the greater good. As I learned from my father, technology is important, but people are an organization’s most important asset.” Reflecting this belief, TELUS has been named one of Canada’s Top 10 Most Admired Corporate Cultures by Waterstone Human Capital, and was the sixth company ever to be inducted into Canada’s Most Admired Corporate Cultures Hall of Fame. TELUS was also recognized as Canada’s leading global workplace by Forbes World’s Best Employers.

When asked what qualities he seeks in potential employees, Darren says he looks for ambition, but warns, “It can’t be blind ambition; it can’t be singular. I look for spirited teamwork and people who believe that we are greater than the sum of our parts.” Darren has created a corporate environment that allows for expression of innovation, which allows creativity to flourish through a culture that demonstrates courage in taking calculated risks.

What I’ve Learned
What is his definition of success? Darren says, “To know if you are being successful, you should ask yourself questions like: Did we make a meaningful difference? Did we live the values and work with integrity? Did we have the humility and grit to learn from mistakes and turn the tuition into future success? Did we serve multiple stakeholders, creating value for our investors and building healthier communities by giving back along the way? Did we innovate and blaze a trail for future generations to benefit from? These are the parameters that define your success.”

Heeding his father’s advice to care for others, Darren says, “I believe that in order to do well in our professional pursuits, we must also do good in the communities where we live, work, and serve.” And in 2010, TELUS became the first Canadian company to be named the Most Outstanding Philanthropic Corporation globally by the Association of Fundraising Professionals. This steadfast belief in the importance of giving back has also driven TELUS, including its team members and retirees, to contribute $1.4 billion, including 1.8 million days of volunteerism, to communities since 2000.

Living up to one’s full potential is also important to Darren, which is why he is enthusiastically supportive of the mission of the Horatio Alger Association of Canada. “The scholarship program is not blind philanthropy,” he says. “I see this as a social investment because the recipients now have a chance to pursue their dreams. They are our future. Giving them support now teaches them to give back to future generations. That is beautifully symbiotic to me.”

A proud Canadian, Darren believes that becoming a Member of the Horatio Alger Association of Canada is not only a privilege, but a responsibility. “We must build upon the heritage of what’s been achieved thus far, and take it further to a point that impacts people. Our success is not numbers on a balance sheet; it is asking: ‘What has been our contribution to society?’ The mission of this Association is to nurture the assets – our young people – within our population, which will define our quality of life tomorrow. We want to develop Canada to not only be a country we can be proud of just within the confines of our border, but also when our brand is on display at an international level. The greatest asset of Canada is its potential; and the greatest responsibility that we have as a nation is to live up to that potential. That’s what this Association is doing for so many young people and I am very proud to be a part of that.”