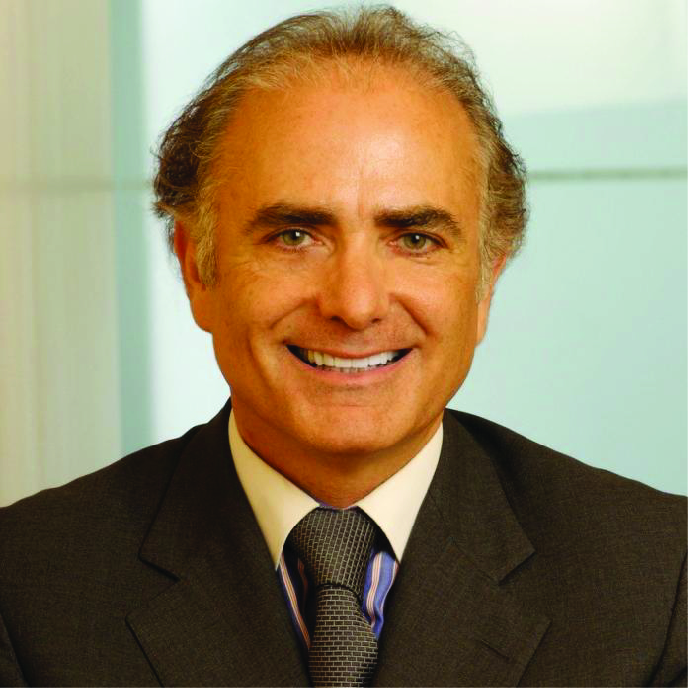 “You have to work hard and be willing to get out of your comfort zone.”

Calin Rovinescu was born in 1955 in Bucharest, Romania. In those days post-war communist Romania was under oppressive Soviet control. Calin’s father was a urologist, and his mother—with two master’s degrees—was an interpreter and teacher. “Education was of paramount importance for my parents,” says Calin. “They believed that my older sister and I would not get a good education in Romania under the current regime, so that, coupled with the then anti-Semitic sentiments of the nation, caused them to seek to leave the country. If permission was granted, which was rare, you had to leave immediately whether or not you had made immigration arrangements elsewhere.”

The family arrived in Montreal, Canada, in 1961, as Calin turned six years old. They had $60 and no other assets other than their higher education. Calin’s father had to redo his medical residency to become a licensed surgeon in Canada, which forced the family to live very modestly for many years. To help with finances, Calin’s mother worked as a retail store clerk, despite her higher education and credentials.

“I’ve taken a lot of inspiration and empowerment from my parents’ experiences,” says Calin. “When we left Romania, they didn’t even know what country we would be going to. It could have been America, France, Israel, or Canada. They didn’t know the language of where we would settle, but they had infinite courage, confidence and hope. They took one step after another to create a better life for our family. I have enormous admiration for their courage and confidence. It taught me to be willing to get out of my comfort zone to reach for something bigger, something that expands your horizon – that literally, the stars in the sky were not out of reach. That anything was possible, regardless of your start in life.”

As a student, Calin’s parents expected him to do well. From the fourth grade on, he was always at or near the top of his class. “My mother was extremely intelligent,” says Calin. “She had a beautiful mind – she understood culture, languages, the arts, and music. I have a photo of her during a cultural exchange between Romania and China, where she served as an interpreter and was the only woman in a sea of men. She was under-employed and likely under-stimulated once we came to Canada, but her influence on me and my sister was significant.”

Calin had a number of part-time jobs in his youth. One of his favorites was selling leather belts on the streets of Montreal. He also worked at a large retailer, and did some shipping and packing for a wholesaler. Later, he served as a tour guide for the American Bar Association’s conference held in Montreal. It was a mixture of student jobs that he feels exposed him, ironically, to areas of retail, logistics, tourism, and customer service, which all played importantly into his future career in the airline business.

Calin attended McGill University under a special college (CEGEP) program and was then admitted to undertake his civil law degree at the University of Montreal before completing his undergraduate degree. This allowed him to graduate from Law School by the time he was 22. He went on to get a second degree in common law at the University of Ottawa—where he is currently serving his seventh year as Chancellor, the University’s titular head.

Career
Calin joined the law firm of Stikeman Elliott LLP out of Law School, and for the next 20 years practiced in the areas of corporate finance and mergers and acquisitions. Eventually, he became managing partner of the Montreal office. “It was an amazing time,” says Calin, who was exposed to Canada’s growing industries in business, banking, pulp and paper, aviation, pharmaceuticals, and biotechnology. “In many respects, I was privileged to be a partner with my clients as they were building their businesses. We also worked a lot with independent investment banks, and I got to see how that industry evolved as larger banks started moving in. It was all extremely energizing.”

When he was in his early 40s, Calin—who had been practicing law for 20 years—began to wonder what the next 20 years would hold for him. He felt an urge to try something new. In 1988, he had advised Air Canada, the country’s largest airline, when it was privatized. In 1999, Air Canada faced a hostile takeover bid, and Calin became close to the company’s CEO in successfully defending against the bid. They avoided the takeover and then merged with the company’s largest domestic competitor, Canadian Airlines. In 2000, Calin was offered a senior executive position, Executive Vice-President of Corporate Development and Strategy, at Air Canada, which he accepted. “It was a big decision for me,” he says. “I was leaving my comfort zone, but I felt this was a pathway I wanted to explore.”

In 2004, Calin served as Air Canada’s chief restructuring officer. In 2009, he was offered the CEO position. “It was the challenge of a lifetime to come in as CEO of a company that I knew well and loved very much. Accepting the position was a decision I was ready to make.”

In Calin Rovinescu’s nearly 12 years as CEO, Air Canada’s shares appreciated more than 4,000 percent, and the company had achieved record revenues, record profitability, and carried a record number of passengers. It expanded dramatically and today serves 220 destinations on all six inhabited continents. During his tenure, Air Canada was recognized by Skytrax as the Best Airline in North America in 8 out of 10 years. The Globe and Mail’s Report on Business magazine named Rovinescu the only two-time winner of Canada’s Best CEO, which he received in 2013 and 2019. In 2016, he was named Canada’s Outstanding CEO of the Year by Financial Post Magazine. In 2018, he was recognized with the CEO Lifetime Achievement Award at the Airline Passenger Experience Association (APEX) expo in Boston, and was named the first CEO from the Americas to be presented with the Award by APEX. He became a Member of the Order of Canada in 2018 and was admitted into the Canadian Business Hall of Fame in 2021.

What I’ve Learned
Calin Rovinescu believes in leaving a “room” better than he found it. As a corporate leader, he embraced new technology and innovation. He believes strongly in community to keep employees focused on the mission because, in the end, becoming successful is a team effort. He also believes in courage and taking steps to move forward, even when it is uncomfortable or you are unsure of the outcome. “Having a courageous approach to life and to business is something that is a part of my mindset,” he says. “I think it goes back to the immigration experience. My parents made a big move to improve our lives, but they weren’t sure where success would be found. You have to work hard and be willing to get out of your comfort zone.”

When considering what success is to him, Rovinescu says he defines it as his family and the values embraced by them. “My wife, my two children, and my two grandchildren are people who desire to achieve and who take pride in what they are pursuing. I think taking ownership of what you are doing is very important so that you can leave your imprint behind”

As the Chancellor of his alma mater, the University of Ottawa, Rovinescu believes strongly in the importance of higher education. He and his wife, Elaine, have created the Rovinescu Admission Scholarships at the University of Ottawa and the University of Montreal for first-generation Canadians or children of immigrants who may not otherwise have the resources to complete their higher education. “Education expands the mind,” he says. “It’s important for our young people to have intellectual curiosity and to learn as much as they can—and to never stop learning. They are our future leaders, and I believe the investments we make in their young lives will have far-reaching benefits for us all.”