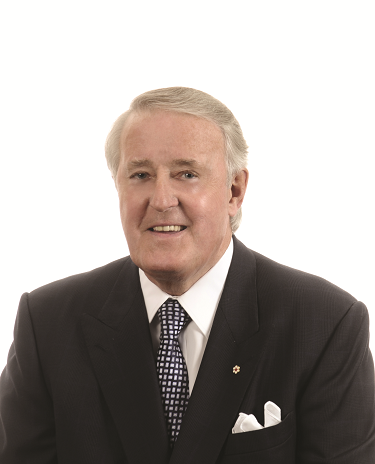 “We live in an era of instant gratification, but real success is not achieved overnight.”

Brian Mulroney was born in 1939 in a small town called Baie-Comeau, in the province of Quebec, Canada. He was the third of six children and the oldest boy. His parents’ first child, a son, died within hours of his birth. “I lived with my parents and two older sisters and our beloved dog, Waggy, in a semi-detached mill-owned house,” says Brian. “The other half of the house was occupied by Mr. and Mrs. Hall and their five children. We lived with them, cheek by jowl, for almost 30 years. At night, we kids would tap out messages to each other on the common wall that separated the houses.”

Brian’s parents were from an Irish colony near Quebec City, which has been created during the Irish famine in the 1830s. During the Great Depression, Ben Mulroney, Brian’s father, who had left school after the ninth grade, went to Baie-Comeau to look for work. The owner of the Chicago Tribune, Colonel McCormack, created the town, along with a paper mill, to provide newsprint for the Tribune and the New York Daily News. “The company provided schools and a hospital and a steady living, which was irresistible to my father,” says Brian. “He signed on as an electrician’s helper in 1937 and stayed there until he died nearly 30 years later.”

Baie-Comeau, 250 miles north of Quebec City, is situated on the north shore of the St. Lawrence River. When Brian was growing up, it was completely isolated and inaccessible except by water. “The summers were fleeting, and the winters long and bitterly cold,” he says. “I remember as a boy I would lay I bed at night and listen to American radio stations. With my imagination, I painted pictures in the sky of all this excitement that was available outside my little town and the future that might exist out there. I was very much a dreamer.”

Brian greatly admired his father. The youngest of 14 children, Ben Mulroney was forced to leave school when he was 14 to look for work. He eventually became a skilled electrician, and supplemented his income from the mill with a small electrical contracting business. “My father worked six days a week in a hot paper mill, including 16 hours on Sunday,” says Brian. “He would come home after a full day’s work, have a quick meal, and then head out into the cold winter nights to fix someone’s oil burner or wire someone’s new home. I learned from him a sense of responsibility, commitment to family, and the importance of hard work. My father used to say, ‘We are sort of poor, but so is everyone else in Baie-Comeau.’ He was right. Egalitarianism prevailed. Everyone, except the mill manager, the family doctor, and the town’s only lawyer was paid essentially the same wage, resided in nearly identical homes, and lived remarkably similar lives. As a consequence, we all felt we were doing quite well.”

Brian’s mother was considered the center of the family’s existence. “We kids obeyed her because we adored her,” he says. “She was kind and gentle, but ambitious for her children and as devoted to the idea of education as my father. We got good marks, worked jobs after school, attended church regularly, respected our elders, and treated our friends well because to have done otherwise would have disappointed her enormously.”

Brian got his first job when he was 10. He worked at the food store as a helper, washing fruits and vegetables and helping keep the store stocked. He did this after school and on weekends, and was happy to have the job. All proceeds went right home to his mother, their central banker. Brian got a second job, which he performed on Wednesday nights. Since the mill paid its workers on Thursdays, the Hudson’s Bay Company—the only store in town—advertised its goods the night before. Brian’s job was to distribute advertising flyers by hand to every household in town. He says, “I was paid $4 a week and I could not understand why I was being paid for the privilege of chatting with friends and neighbors up and down my neighborhood streets, giving out flyers. I began this job in the summertime, however, so when winter came $4 appeared pretty paltry. I told my dad I was going to quit. He firmly told me never to quit anything constructive in life, no matter the difficulties or criticisms. So, in a stroke of genius, I conscripted my older sisters, Olive and Peggy, who dutifully set out with me every Wednesday night that winter.”

The first school Brian attended was the Académie St. Amélie, a primary school within easy walking distance. It was a Catholic school run by nuns. He quickly became a polite honour student who served as an altar boy at the neighboring church. Brian had an unquestioning acceptance of rules and conduct and values if they gained him approval and advancement. “Growing up, I was known as a good kid from a good family,” he says. “I remember that each Christmas my sisters and I prepared a large box of food, fruits, and sweets, which we dragged through the snow to give to the nuns at the convent. My father said they did so much and requested so little that we had to share whatever we had with them.”

Five years after Brian’s birth, his sister Doreen was born, followed in short order by Gary and Barbara. “They filled our home with laughter and joy,” he says. “But the financial demands grew. That’s when my father started his side business and my mother started taking in boarders. We had four bedrooms, one for the boarder, one for my parents, and two for six children. For a while, it felt as if we were stacked up like cordwood in those little rooms, but the arrangement soon became part of our lives and we readily made do.”

At the age of 10, Brian was sent to a school run by an order of priests and brothers. It was still in town and within walking distance. He remembers, “We all walked every day, rain or snow. I continued to do well in school, motivated partly by the fact that our marks were published for all the town to see.”

When he was 14, Brian’s parents decided it was time to send him to St. Thomas College in Chatham, New Brunswick. This was not a school for privileged children. The full cost for one year was $405, which was a sacrifice for Brian’s parents. But they were adamant that he go. He was secretly afraid to go to boarding school, and was initially very lonesome and homesick, but he eventually came to greatly enjoy the school. He did well academically, and won the graduation prize in Latin and emerged as the school’s debating leader.

Brian always worked in Baie-Comeau during his school holidays. He had jobs as a truck driver, laborer, and post office sorter. His most grueling job was with a grain company, where he put in 10-hour days shoveling grain into 100-pound bags, sealing them, and then hoisting them on his shoulder to be stored in a building until they could be shipped overseas. At one point, he talked to his father about entering an apprenticeship at the paper mill to help the family financially.  His father told him, “Thank you for the offer. We do need the help, but the only way out of a paper mill town is through a university door. That’s what I want you to do.”

In 1955, at the age of 16, Brian became a college freshman at St. Francis Xavier University. He got involved in campus politics and joined the Progressive Conservative Party. He attended the 1956 leadership convention in Ottawa as a youth delegate. While at St. Francis Xavier, he won several public speaking contests and was a star member of the debate team. He became campus prime minister in the Model Parliament in 1958. To pay for school, he took out a loan for the coming year, and then worked during the summer to pay off the loan just in time to take out a loan for the following year.

He earned a degree in political science in 1959, and then began law school at Dalhousie Law School in Halifax before transferring to Université Laval in Quebec City. At this school, Brian built a network of friends that would play a prominent role in Canadian politics for years to come.

At the age of 24, just as he finished law school, Brian’s father died. He moved his mother and two younger siblings to Montreal. He financed the college educations of his brother and sister and supported his mother the rest of her life.

After graduating from Laval in 1964, he joined the Montreal law firm now known as Norton Rose, which at the time was the largest law firm in the British Commonwealth. Mr. Mulroney became a labor lawyer, an exciting new field in Quebec. He was instrumental in ending several strikes along the Montreal waterfront. He became a partner in his law firm in 1971.

In the mid-1970s, Mr. Mulroney joined the Iron Ore Company of Canada as executive vice president. He became president of the company in 1977.

In 1983, Brian Mulroney became the head of the Progressive Conservative Party. Two months later, he entered Parliament as the MP for Central Nova in Nova Scotia. In 1984, he was elected 18th Prime Minister of Canada-a position he held until 1993. Upon resigning, Mr. Mulroney rejoined the Montreal law firm of Norton Rose as senior partner and served as a director of leading international companies.

When asked how he defines success, Mr. Mulroney says, “We have developed into an era of instant gratification, but real success is not achieved overnight. It is the culmination of a lot of effort and dedication to objectives. I believe the less flashy values of our parents and forefathers are the durable ones.”

Mr. Mulroney believes young people should be dedicated to getting a good education. “While in college, young people should study as hard as they can and get the best education possible because this opportunity isn’t going to come around again. They get four years on a university campus to have unlimited time to reflect, study, and learn. If they devote themselves to that, they will have the foundation of a happy and successful life.”

Mr. Mulroney has been awarded Canada’s highest honour, Companion of the Order of Canada, and has also been made a Grand Officerof the Ordre National du Québec. He has received honorary degrees and awards from universities and governments at home and abroad.