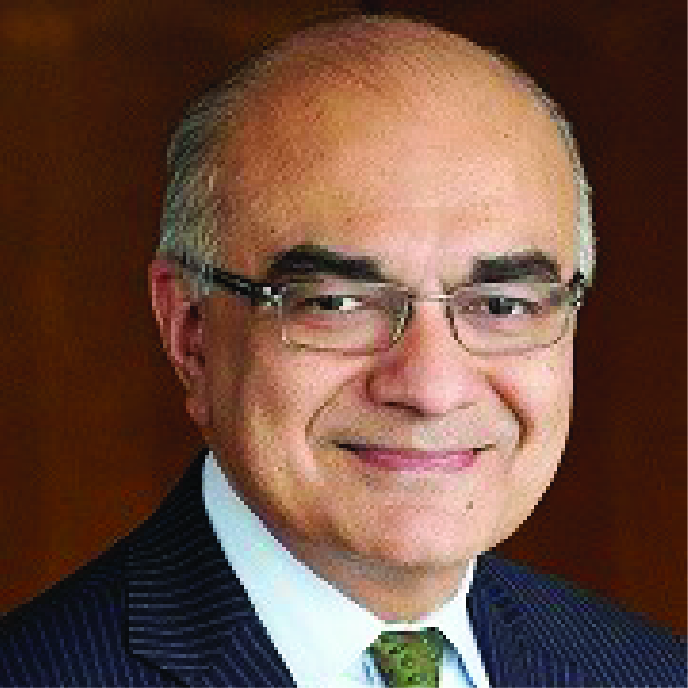 “The secret sauce of success is a culture that is centered around diversity, inclusion, and respect for each other.”

Bharat Masrani was born in Uganda in 1956. Of Indian descent, he was the youngest of five children in an enterprising family that had migrated decades earlier. “In 1896, the British sent many Indians to Uganda to build a railway in East Africa,” says Bharat. “My family was not a part of that experience, but they did migrate there once the railroad was established to set up in business. It seemed like a promising opportunity.”

At the age of 11, Bharat’s father started out in the family business founded by his own father and uncles. “Over the years, my father built the business into a successful enterprise,” says Bharat. Unfortunately, his health failed him in his early 40s and he passed away when Bharat was only 7.

“My father was the eldest son and after he passed, my mother became the head of the extended family,” says Bharat. “She was wise and capable and proud of our heritage. She was a very inspiring woman who instilled confidence in me and encouraged my education. She played a very important role in our lives.”

Bharat’s second oldest brother, Hasu, was another important source of support during Bharat’s early years. “He was much older than me,” says Bharat. “While our eldest brother was away building his business, Hasu was still at home, and he became a father figure to me. He was my anchor and a huge inspiration.”

As was the custom, Bharat was sent to an English boarding school after completing his primary grades. He was a good student and enjoyed his education, but he found it challenging to be so far from his family. “I think in many ways, my boarding school experience shaped me and made me self-reliant,” says Bharat.

In 1971, when Bharat was 15, Idi Amin became Uganda’s president. A year later, he expelled Asians from Uganda.

Bharat had been brought up expecting to join his father’s business when he came of age, but that was no longer an option. The family was fortunate to reunite in England, but it was a very challenging time.

“When you lose your country,” says Bharat, “you never feel like you are a part of the mainstream. We were an enterprising family and hard workers, which served us well in the end, but it was a difficult time for us.”

Following his high school graduation, Bharat traveled to North America to look at colleges. He decided on York University in Toronto and earned a BA with honours in 1978. He went on to earn his MBA from York University’s Schulich School of Business in 1979. While in Canada, he met his future wife, Shabnam. He decided to make Toronto his permanent home and in time, became a Canadian citizen.

Bharat joined TD in 1987 as a commercial banking trainee and went on to hold many senior executive roles over the next three decades.

In 1993, Bharat was appointed head of Corporate Banking in Canada. Two years later, he relocated to Mumbai, India, where he set up TD’s first office in that country. In 1997, Bharat moved to London to co-head Wholesale Banking for Europe, the UK and Asia. In 1999, he went on to lead TD’s discount brokerage business, TD Waterhouse, as Senior Vice President and caught the attention of the company’s CEO, Ed Clark, who became a mentor. Bharat returned to Toronto in 2003 and was named Vice Chair and Chief Risk Officer of TD Bank Group a few years later. After a move south of the border to lead TD’s U.S. retail banking business for several years, Bharat was named Chief Operating Officer in 2013. The following year, he became Group President and CEO of TD.

TD Bank Group is one of Canada’s largest banks and ranks in the top 20 globally, with more than 27 million customers and over 90,000 employees. Bharat is recognized for helping TD expand its North American footprint during his time in the U.S.

“I’m very proud of what TD has achieved,” says Bharat. “It’s a team effort. As a leader, my job is to bring out the best in our executives and then work as a team to achieve our goals. It’s important to listen and learn, to exercise good judgment, and to have humility. I hope that when I end my tenure, I am able to say I made a good contribution and helped position TD to grow and win.”

What I Have Learned

When asked how he would define success, Bharat says, “Success is not one dimensional. For me, a part of TD’s success is enriching the lives of our customers, our colleagues and the communities in which we live and work. On an individual level, I think one is successful when they are happy with what they do and are achieving their full potential.”

Business aside, Bharat believes one of his greatest achievements is his family. With two adult children and one grandchild, Bharat says, “Raising a wonderful family with my wife is one of my proudest accomplishments and brings us both joy and satisfaction.”

When Bharat reflects on his leadership style, he stresses the importance of what TD calls its ‘Shared Commitments’ that guide every employee across TD: think like a customer, act like an owner, innovate with purpose, execute with speed, and develop colleagues.

“We are a financial services company. We’re in the business of meeting people’s aspirations when they want to buy a home, save for their children’s education, prepare for retirement or grow their business. We can only do that if our bank is successful. Financial success matters; we are measured by it. But the secret sauce is our culture, which is centred around diversity, inclusion and respect for each other,” Bharat says.

“We are only as good as the communities in which we live and work. I believe that if we are improving our communities, providing good jobs with a good company, and meeting the needs of our customers and clients, then we’re achieving success.”

When Bharat offers advice to young people, he encourages them to find their passion.

“My mother was passionate about education,” he says. “She used to say that repressive regimes can take your home and belongings, but they can’t take your brain. It was very important to her that I get a good education, and I very much agree with her about its value.”

Bharat also believes it’s important to maintain your personal integrity from the start.

“Core values matter. What you are doing for your community matters. It’s good for a young person to understand this from the beginning. It’s also important to embrace opportunities when they present themselves. An opportunity can sometimes look like a difficult challenge, but I always like to think of challenges as a chance to learn and hone my skills.”

For young people who have faced adversity early in life, Bharat encourages them to never give up.

“I think it’s important to have a desire to win. When young people are looking for a company to join as they start their careers, I hope they will settle on a successful and values-driven company like TD. If they surround themselves with great people, continue to listen and learn, before they know it, magic happens.”

Honoured by his Horatio Alger Award, Bharat believes strongly in the Association’s mission to open doors for young people who have persevered through adversity.

“These bright young people are the leaders of the future. It’s critical that they get the education they need to make contributions that will help society move forward. It is an honour and a privilege to help others overcome adversity and achieve their full potential. For me, it’s a gift to be able to help make that happen in the lives of deserving young people.”