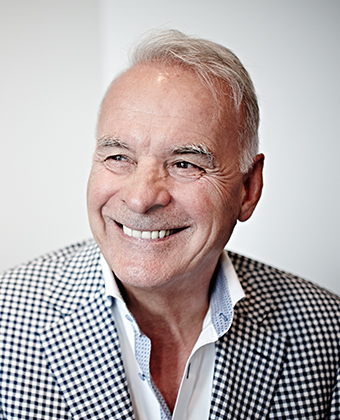 “If you have a good attitude, keep your ego in check, and work hard at something you enjoy, you will be successful.”

Alain Bouchard was born in 1949, in Chicoutimi, Quebec, and was one of six children. His parents were devout Catholics, as was most of Quebec at that time. His father owned an excavation company and was ambitious and a tireless worker, despite only having three years of elementary school education. Bouchard’s mother, who went to school through the seventh grade, managed the company’s finances.

Chicoutimi was geographically isolated until the 1950s, when a road to Quebec City was built. Taking advantage of the opportunity, Bouchard’s father won a contract to carve the pathways through Quebec’s forests. “To do the job, he acquired heavy new equipment,” Bouchard said. “But the man he had his agreement with went bankrupt, and so my father did as well. I was nine at the time, and my mother was pregnant with her sixth child. From then on, there was a life before and life after.”

After losing the family home, the Bouchards moved into a mobile home in a remote community. “My father was ill-prepared to run a business,” sad Bouchard. “He lacked good counsel and poorly managed the debts that were owed to him. It became my great desire to one day restore his honour.”

It took Bouchard’s father 10 years to pay off his debts. He worked two mechanic jobs for seven days a week, and later worked in the remote mines, requiring him to be away from the family for up to three months at a time. Bouchard’s mother had a difficult time accepting the sudden change in circumstances, and after giving birth to her last child, she fell into a deep depression. She was eventually placed in a psychiatric institution for two years. “The oldest daughter, my sister Christiane—who was only three years older than me at 12—was forced to leave school to take care of our family while my mother was in the hospital. We went from whole milk to powdered milk, from beef or chicken or pork to bologna. It was a very difficult time for all of us.”

Because there were no local high schools in Chicoutimi, Bouchard and his older brother attended a boarding school run by priests and returned home each summer to work. After graduating, Bouchard worked a menial job in a factory before helping his brother manage a franchise grocery store called Perrette. “I would replace him at the counter, without pay, a few nights a week,” he said. “I did it to help my brother, but I really enjoyed it. I liked greeting the customers, and I discovered I have an innate sense of interior design. I thought the store should be attractive, clean, and organized. I began to rearrange the shelves.”

A year later, Bouchard was working in the store while his brother was on vacation, and a Perrette supervisor commented on the store’s attractiveness. After the supervisor discovered that Bouchard was responsible, he gave Bouchard a job of organizing the new Perrette stores. For the next two years, Perrette stores quickly expanded. When a new location for a franchise was found, Bouchard was given two weeks to get the interior ready for the opening. He later became an occasional replacement manager, and then, in 1972, he became a territory supervisor. Shortly thereafter, he became a director.

After Bouchard had opened 100 of Perrette’s 184 stores, he left Perrette because he believed that the company did not treat its employees well. He then joined Provi-Soir, a competitor, as the head of development, construction, and real estate. Wanting to open his own store, Bouchard also attended business courses at HEC Montreal for three years while studying English. He eventually bought two Provi-Soir franchises using his earning from private real-estate investments. Before leaving Provi-Soir, Bouchard trained his two replacements for 18 months.

With the goal of building a network of stores across Quebec, Bouchard enlisted three businessmen to form the executive team that launched Couche-Tard in 1980. Bouchard served as the company’s president and CEO until 2014. Under his leadership, the company expanded steadily to become Canada’s leading convenience store chain and the largest independent convenience store operator in the United States in terms of number of company-operated stores.

Bouchard’s life changed relatively little despite his wealth and success. He learned the importance of hard work from his father and the importance of family from his mother. “I’ve always wanted to own a business,” he says, “but not at the expense of my family. To have success, I believe you must first have success with your family.”

Bouchard says that life is too short to spend on doing something you don’t like. “I tell today’s young people if they don’t like what they are doing, they should do themselves a service and leave. But it is equally important to understand that if you want to change your adverse circumstances, you can. So much of it comes down to attitude. I hire on the basis of attitude, and I fire on the basis of attitude. I am allergic to big egos. If you have a good attitude, keep your ego in check, and work hard at something you enjoy, you will be successful.”

Bouchard is an Officer of the National Order of Quebec; has been named Canada’s 2012 Outstanding CEO of the Year and the Institute for Governance’s Great Economic Builder of Quebec; received the Fraser Institute’s T. Patrick Boyle Founder’s Award; and was inducted into the Canadian Business Hall of Fame.

In 2002, he spearheaded and financially supported housing for individuals with intellectual challenges, who require some supervision. He also funded McGill University’s groundbreaking research on intellectual disabilities. Bouchard and his wife, Sandra, are particularly close to this cause because their son was born with cerebral palsy. “He has kept me grounded all my life,” says Bouchard. “He works one day a week in our mailroom and lives in a group home. From Jonathan, I’ve learned to listen to and pay close attention to those who are talking to me—no matter who they are or what their station in life is. It has made me a better person, I believe.”

The Sandra and Alain Bouchard Foundation is devoted to helping those with intellectual challenges as well as the arts and culture. The foundation also financed the Pierre Lassonde Pavilion at the Musée national des beaux-arts du Québec in Quebec City.