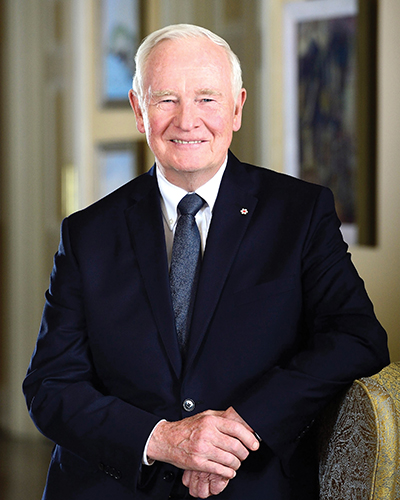 David Johnston, the middle of three children, was born in 1941, in Copper Cliff near Sudbury, Ontario, Canada, where his father, who had a tenth-grade education, managed a small hardware store. When Johnston was seven, his father moved the family to Sault Ste. Marie, Ontario, where, with the help of a small loan from his mother-in-law, he opened his own hardware store.

Sports were a big part of David Johnston’s childhood. “I have so many great memories of my time in northern Ontario, where we learned to skate before we learned to walk,” he says. Johnston began working at the age of nine as a paperboy. He also had a job delivering for a local drug store. He scheduled his jobs at night and on Saturdays so that he could pursue sports during the day. He made his deliveries on his bicycle and often had to pedal in snowstorms to complete his route. “I didn’t worry about my family’s lack of money,” he says, “I just knew I needed to work to pay my own way as much as I could. My father struggled with his hardware business; after nine years, it finally failed, eclipsed by the larger chains. For a period of time while I was in high school, he was unemployed. But in my family you didn’t dwell on setbacks.”

During Johnston’s youth, his mother helped support the family by working the night shift as a nurse’s assistant. By the time he was 16, she was forced to quit due to her diminishing eyesight. By the age of 45, Johnston’s mother was legally blind. “She was a hard-working, courageous woman,” he says. “I admired the way she coped with her blindness. She also had breast cancer in her early 40s. The fear of losing your mother is a formidable force that just rivets you. Fortunately, she had surgery and recovered from that health scare. Church was a big part of my upbringing, and I am a person of faith, which has served as the framework of my value system. We were never a family that felt sorry for our misfortunes. We simply dealt with them as best we could and moved on.”

Education was important to Johnston’s mother and to him as well. He loved learning and greatly valued his teachers, whom he often credits with helping him in his life journey. “My mother always told me that education opens doors,” says Johnston. “I knew a strong education would be my ticket to a rewarding career and fulfilling life.” When he was finishing high school, Johnston worked for the town’s main employer, a steel company. Many students spent their summers working there, and through his association with this business, Johnston earned a college scholarship. Throughout his college years, including law school, he returned each summer to work for the steel company during the day and in the evenings worked as a junior reporter at the local radio and television station.

Johnston was considering pursuing either law or medicine. However, in his last year of high school, he suffered a neck injury, which pinched the nerve in his left hand. He was the starting quarterback, and he began to notice he couldn’t hold the ball on cold days. Eventually, he lost partial use of his hand. He had surgery to alleviate the problem, but knew that his football days—as well as his idea of being a surgeon—were over.

In 1959, Johnston entered Harvard as a freshman on scholarship. He loved the school, but his first three weeks there were challenging. In a compulsory English course, he was required to write an essay each week. His first essay was about Milton’s Paradise Lost, which came back graded D-. “I didn’t think they had grades that low,” he says. “At that point, I knew I had to up my game.”

Johnston played hockey at Harvard for four years and was selected to the All-American team in his last two years. He was subsequently named to Harvard’s Athletic Hall of Fame. He did equally well in his academic life, graduating magna cum laude and earning a scholarship to study law at the University of Cambridge in Great Britain. Two years later, after completing his master’s in law, he returned to Canada, where he earned a Canadian law degree from Queen’s University in Kingston, Ontario. But his love story for Harvard continued. In 1983, he was elected the first non-U.S. citizen to chair Harvard’s Board of Overseers.

Johnston planned to practice law, but he was asked by Queen’s to join the faculty. He taught law for two years and then joined the University of Toronto’s law faculty, where he taught for six years. In 1974, he became dean of the Western University Law School. In 1979, he served as the principal and vice chancellor of McGill University. In 1999, he took over as president of the University of Waterloo, a position he held for the next 11 years. “I love the study of law,” he says. “It was a natural vocation for me. It’s been very important to me to have been involved in improving the law administration of justice and constantly teaching students with the fundamental theme: is law just?”

In 2010, David Johnston was appointed Governor General of Canada. In this position, he served as Queen Elizabeth’s representative in Canada. His responsibilities included opening and closing Parliament, signing into law all legislation and orders in council, ensuring there is a prime minister with the confidence of Parliament, and protecting the constitution. He was the commander-in-chief of Canadian armed forces, met with foreign dignitaries who visited Canada, and represented his country on trips abroad. Recently he said, “I love this country and enjoy the sense this positon gave me of making a contribution to Canada. I believe public service to be an honorable calling and sacred duty. This positon allowed me in some small way to give back to the country that has given me so much. I have been blessed to live, work, and raise a family in Canada.”

Johnston’s motto upon taking office was Contemplare Meliora—to envision a better world. During his installation ceremony, he gave a speech titled “A Smart and Caring Nation—A Call to Service.” In it, he outlined three areas of focus for his governor generalship:

In his speech, he also said, “If you remember only these words of what I say today, they are: cherish our teachers.”

Looking back at his years in office, Johnston says, “I’ve always thought Canada is an especially good country, but I didn’t realize how good it was until I took up this position and came into contact with so many wonderful people and communities.”

A few days before Johnston completed his service, Prime Minister Justin Trudeau described him as “a man of strength, intelligence, and compassion.” He also praised Johnston as an athlete and academician dedicated to education and lifelong learning. The Government of Canada will donate $3 million, and up to $7 million in matching funds over 10 years, to the Rideau Hall Foundation, a charity founded by Johnston. “Its goal,” he says, “is to gather, align, and mobilize ideas, people, and resources to move the Canadian spirit and our shared aspirations forward.”

Since the end of his vice-regal tenure, Johnston joined the consulting firm Deloitte as an executive advisor, where he will provide advice to private sector and governmental clients on innovation, inclusiveness, talent development, and leadership and the role those things play in economic growth. He also holds a number of pro-bono positions, including chair of the Rideau Hall Foundation, the charity he established in 2012.

When addressing young adults, Johnston advises them to be curious and find a passion for something. “Learn how to manage your time and work well with others,” he says. “I also think that as early as you can in life, try to transition from saying ‘I’ to ‘we’ as much as possible. When your world is more focused on others, life becomes more interesting, less lonely, and more satisfying.”

Serving others is central to David Johnston’s values. He says, “If you want to build good societies and good communities and out of that a good country, it begins by saying I care about the person next to me and the person next to that person—the one I don’t know so well.”

David Johnston has long been a letter writer. He and his wife have five daughters; when the first one went off to college, he wrote her a letter each morning as a way to stay connected and, along the way, impart a little advice. When all of his daughters were away at school, he would write one letter and send copies to all five girls each day. That practice has carried over into his work life. Sometimes his letters are expressions of gratitude to those who have done a great service, or of admiration for those who have pioneered new ways of thinking, or as encouragement to those embarking on uncertain adventures. He compiled these letters into a book called The Idea of Canada—Letters to a Nation in 2015.

In all, Johnston has written 35 books. One of his most recent is titled Innovation. Looking to encourage the culture of innovation in Canada, Johnston and his coauthor began looking for stories of Canadian innovation. Their book has been successful, and they have compiled so many stories, they started a website (innovativeculture.ca) to continue to add to the collection. A children’s edition was recently published with a copy going to every school in Canada, and lesson plans have been made for teachers in K–12 to teach innovation. “I want all Canadian children to be innovators, which simply means doing things better,” he says.

Deeply honored by his Horatio Alger Award, Johnston says, “It is a matter of great pride to become a member of the Horatio Alger Association, but the honor comes with a responsibility to continue to do things that help others by giving them a hand up, rather than a handout.”